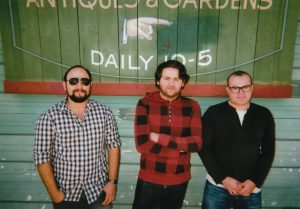 Dronen is a rock trio with roots buried deep in the ’90s, growing up listening to the likes of Nirvana, Smashing Pumpkins, and Radiohead. These early influences allow them to conjure up a familiar, yet original sound that they hope will help them to thrive in the slow-but-inevitable resurgence of rock music. A favorite of promoters and sound guys all over southern California, Dronen never fails to unleash the pleasant racket when the house lights grow dim.
After a few initial hiccups, as well as intermittent recording hiatuses (i.e. life getting in the way), the 284 Days EP was finally completed, which ended up taking…wait for it…284 days from start to finish. Dronen is extremely pleased with the outcome of their latest effort, which they believe showcases their growth in both songwriting and recording abilities and will be self-released in February.
Ghettoblaster recently caught up with Dronen’s Victor Aguilar to discuss some 2014 releases he was pleased with. This is what he told us.
Top 10 (in no particular order):
La Dispute – Rooms of The House
Lyrically and musically wonderful. The evolution of La Dispute continues and I can’t wait to see what’s next.
Braid – No Coast
16 years since their last release and Braid has made a record that shows that they have truly grown, but not forgotten who they were.
The Jazz June – After The Earthquake
It’s pretty awesome when you can bring a refreshing new sound to the scene when you’ve been out of it for over a decade.
Trioscapes – Digital Dream Sequence
This is just ridiculous. The musicianship on this album is unreal. Jazz Fusion? That’s a thing? I’m on board.
Spoon – They Want My Soul
Mr. Consistency. Spoon never fails to disappoint. Some may not like that Spoon sounds like Spoon album after album but for me, this is a good thing.
Mogwai – Rave Tapes
Another solid effort to add to the already stunning discography of Scotland’s finest post-rockers.
Thee Silver Mt. Zion Memorial Orchestra – Fuck Off Get Free We Pour Light on Everything
You’ll be hard pressed to find a band that can blend so many sounds together as well as SMZ.
Circa Survive – Descensus
Every album has this band being completely themselves but still managing to be different and push the envelope of their sound. Fantastic album, start to finish.
United Nations – The Next Four Years
Chaos at its finest. Geoff Rickly and crew come through huge on this album.
Pianos Become The Teeth – Keep You
I find myself having new reasons to truly enjoy this album with every listen.
(Visit Dronen here: http://www.dronenrocks.com/.)