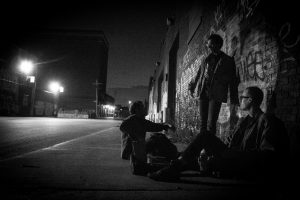 The Motor City’s Jamaican Queens create a cacophony of sounds that is hard to hang a label on, although they call it “trap pop.” For the uninitiated, their music is largely a palate splashed with every artistic whimsy the dudes can throw at it, even if that’s pitchy synth blends, fuzzy bass and 808 drum samples that keep pace with chart toppers from modern electronica and hip-hop. The band are currently putting finishing touches on the follow-up to their celebrated 2013 debut, Wormfood, which they’ll release in 2015.
Ghettoblaster caught up with vocalist and multi-instrumentalist Ryan Spencer to discuss his favorite albums of the year. This is what he was spinning.
1. Moodymann, s/t
The weirdest personality in dance music made his most accessible record. This is my fav producer from Detroit. He should be way bigger than he already is.
2. Sun Kil Moon, Benji
I never hear lyrics like this. At first I thought the music was kinda whack but I came around quickly.
3. Todd Terje, It’s Album Time
I am really into his disco edits. This record flows so nice
4. Trust, Joyland
Gloomy, trance-y, really interesting voice. So into all his shit.
5. Sean Nicholas Savage, Bermuda Waterfall
One of my favorite contemporary song writers made my favorite album to date!
6. Tops, New Album
Instantly accessible pop.
7. Ritual Howls, Turkish Leather
I used to live with some of the members. Awesome industrial dark vibe group out of Detroit.
8. Future, Honest
I listened to this a ton when me and Clancy were working demolition this summer. Such a fun record.
9. Future Islands, Singles
I was on tour in Europe when I got into this album. I found it so relatable. So many amazing melodies and the bass playing reminds me of new order.
10. Amen Dunes, Love
I like the production. Song writing seems cool too. I was listening to it quite a lot in the spring. Getting high and going for a jog is nice to do while listening to this one.
(Visit Jamaican Queens here: http://jamaicanqueens.com/.)