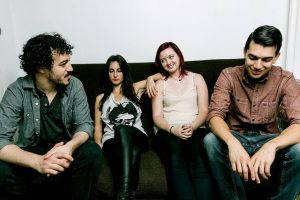 Picture a crowded party. It’s sweaty, rowdy, and most of all, it’s raucously loud. That’s the experience of a Blue and Gold show, and it’s the atmosphere they’ve captured on their debut album, In My Head.
The band developed their chemistry on stage first, playing high-octane shows around New York City. Now with In My Head, Blue and Gold have created a debut bursting with as much swagger as their live show. It’s also a meticulously crafted statement from a cohesive team.
They shared the first single from their forthcoming full length debut via Purevolume. The album title track “In My Head” is available to hear and share HERE. (Direct Soundcloud link HERE.). The 2-girl, 2-guy outfit play a NYC album release show on January 10, 2015 at the Mercury Lounge. The full album is available for pre-order — physical HERE and digital HERE.
Ghettoblaster recently caught up with the band to discuss some of the 2014 albums they felt had swagger. This is what they told us.
Beyonce – Beyonce: Platinum Edition or Beyonce: More All hail Queen Bey. If you haven’t already bought Beyonce, this new Platinum Edition should be incentive enough to do so. Sure, this version wasn’t an amazing surprise gift to the internet like the original, but the new additions make up for it. The audio/visual album contains all the original songs from Beyonce, in addition to a handful of remixes of those songs (“Flawless”, “Drunk In Love”, “Blow”), a remix of her song from her H&M campaign (“Standing On the Sun”), and 2 new songs/videos (“7/11” and “Ring Off”).
Since I don’t have a lot of space, I will simply state the best parts of the album, both audio and visual, in list form: when the bass comes in on “Haunted”, Frank Ocean’s part in “Superpower”, Beyonce’s dance in “Drunk In Love”, Justin Timberlake’s bucket beat in “Yonce” (part of Partition), “Rocket” obviously being the next great bedroom song, everything about “Flawless”, and how much the new video for “7/11” makes you want to hang out with Beyonce. With Beyonce: Platinum Edition out just in time to gift it to your favorite member of the Bey Hive for the holidays, Earth’s favorite independent woman shows us that she continues to run the world. – GG
St. Vincent – St. Vincent
This album blew me away. I don’t even know where to begin. I remember the first time I heard “Digital Witness” and the chorus exploded in my speakers, I thought this album should win every Grammy ever. The songwriting is superb. The arrangements are dynamic and quirky. The production and mixing are animated and full of kinetic energy. I can’t speak highly enough of this album. – Chloe
Jack White – Lazaretto
Anyone who knows me knows that I have a (slightly unhealthy) obsession with Jack White. He’s so strange in the best way. I can’t get enough. He has always maintained this rawness in his music and his playing that can be both painfully jilting and catchy-as-hell at the same time. And even though his solo music isn’t as barebones as White Stripes material, Lazaretto has its own quirks and is very uniquely Jack White. The guitar sounds are exceptional, the lyrics without frills, and every solo makes my soul cry. – Chloe
Hostage Calm – Die On Stage
My favorite album released in 2014 was Hostage Calm’s Die On Stage. From the more punk-inspired “A Thousand Miles Away From Here” to the darker, almost trance-like vibe of “Raised” featuring Vinnie Caruana, each song has its own vibe, but the record still feels like a record, not a bunch of songs thrown together. I was also super stoked that the band worked with Will Yip as I’m a huge fan of the sound of his records. – Derek
Desert Sharks – Template Hair
The ladies in Desert Sharks play unapologetic, danceable rock ‘n roll, and their EP, Template Hair, is a burst of thrashing energy. We had the pleasure of sharing the stage with Desert Sharks a little while back, and their ferocity is unmatched. The frontwoman also named her bass Boris, which is incredible. – Chloe
Modern Rivals – Cemetery Dares
Another NYC gem of a band that released a truly gorgeous album this year. Our friends Modern Rivals have always been awesome, but they really outdid themselves with Cemetery Dares, a lush, melodic treat with plenty of complex musical nuances. – Chloe
Sia – 1000 Forms of Fear
The best pop album of the year. Sia might not show her face, but her badassery is on full display on this record. – Alex
Jenny Lewis – The Voyager
I’ve been a fan of Jenny Lewis since the days of Rilo Kiley, and her knack for compelling lyrics has been a consistent thrill. On The Voyager, Lewis continues to surprise, delight, and engender discomfort with her lyrics, and the production is fantastic. “Just One of the Guys” is a favorite track of the year. – Chloe
Skaters – Manhattan

This album has so many catchy choruses that it’s hard to stop listening. Kind of like Pringles. But Pringles that taste a little like The Strokes and have a Hawaiian themed container. “Deadbolt,” “I Wanna Dance” and “Miss Teen Massachusetts” are highlights. – Chloe
Merchandise – After The End

On After The End, Merchandise expand their sound to include more electronic/synth/spatial elements, and it fits them well. Carson Cox’s vocal performance has this crooner element to it that I love, and the songs on this record are haunting. – Chloe
(In My Head is available on CD and download on January 13, 2015 via ByrdHouse Records.)