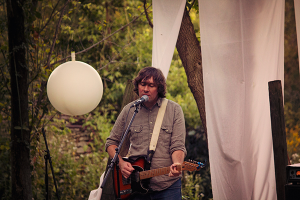 Andy Ingram is a musical renaissance man. In addition to playing in several of Ohio’s finest indie bands,  XL427, Kris N., Jean-Michel, L’Albatros, Ruetschle, and Jill + Micah, he also regularly books local shows and runs the independent label Poptek Records. The labels mantra “a simple label with big pop songs” is one he takes to heart; he’s a simple Ohio dude with his fingers in the best D.I.Y. pots that Ohio has to offer.
Ghettoblaster recently caught up with Ingram to discuss some of 2014’s biggest records of the year. This is what he told us.
I’m just going to do a “Top Six” since the rest of the list would just be filler. 1- The Mary Onettes, Portico
This Swedish band just can’t do anything wrong in my eyes. Their last three albums have been perfect, including this year’s Portico. The songs are brilliant. The sound is drenched in delayed guitars and distorted synths. They have moved from being an ’80s influenced band to just being spacey and unique and with great songs. 2- The Fresh & Onlys, House of Spirits
I saw this San Francisco band on a whim in Seattle. Only 30 people showed up to one of Seattle best clubs, so it instantly felt more like a typical Dayton show. Plus my friend and bandmate Mike Ruetschle was at the show. And then The Fresh & Onlys floored both of us with their obtuse pop progressions, memorable guitar hooks, and super catchy bass lines. I love being surprised. While their previous work can be too Shins-like, the new album is quite their own brand of odd, fuzzy, Western pop. 3- Joyce Manor, Never Hung Over Again
Kris N. turned me on to them and the new record is so solid. None of the punk rock elements of this band are new, it is just so well done. Every song on this record should be a huge hit. 4- Mike Adams at His Honest Weight, Best of Boiler Room Classics
Bloomington, Indiana, has become quite an important music scene and Mike Adams is the top of that in my view. His songs and melodies are just so good, his band is top-notch, and his jokes are awkwardly funny. 5- Jean-Michel, As Magic as It Gets
I have to mention a Poptek-related release. Johnny Callon has taken to releasing self-recorded demos until he gets enough time from school to record a proper album. Every new, sad, smooth, clever song he releases just shows him becoming a better and better songwriter. I hope he someday finds some great girl to love, but in the meantime, his heartache is producing some wonderful music. 6- I Was a King, Isle of Yours
Until I overpaid for this vinyl, I could only find this record through torrent, which is a shame. I Was a King just makes catchy, mesmorizing power pop. The Norwegian group is signed to a big label in their home country. Warner Music mysteriously doesn’t distribute I Was a King’s music to the states. Their last album You Love it Here was even better, produced by pop legends Norman Blake (Teenage Fanclub) and Robyn Hitchcock (The Soft Boys).
(Visit Poptek Records here: http://www.poptek.com/.)