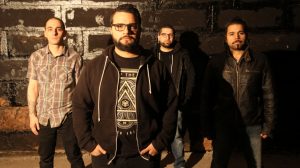 The acclaimed, genre-defying Brooklyn quartet SO HIDEOUS, released their full-length debut Last Poem / First Light in April. The album offered an emotionally diverse mélange of post-hardcore, symphonic black metal and experimental/shoegaze fused with classical influences.
The band has often stated that they find influence in 20th Century classical composers Phillip Glass and Arvo Part, so we figured the members would have a diverse palate. Ghettoblaster recently caught up with guitarist Brandon Cruz to find out which of this year’s releases he found most delicious.
1. Max Richter: Recomposed/Vivaldi’s Four Season’s
Finally officially released! His alteration of “Summer” is some strange, amazing mix of modern, baroque and totally insane. Unbelievable record. Seriously, listen to this one…
2. Kiasmos, Kiasmos
Olafur Arnalds is definitely a big influence and the mix here of his chamber music with electronics is both beautiful and dance floor worthy.
3.    Thom Yorke, Tomorrow’s Modern Boxes
This one came as a surprise to me because I wasn’t too keen on The King of Limbs, but there’s a real quiet confidence here. On the “Motherlode” his voice sounds the best it’s been in years.
4.     Hans Zimmer, Interstellar Original Soundtrack
Every single chord on this is absolutely massive. That nearly 100 year old organ is so HEAVY.
5.     Spooky Black, Black Silk/ Leaving EP
Super minimal, lush dark ambient with an R&B/ James Blake vocal inflection. This kid’s got something very special brewing here.
6.     Blonde Redhead, Barragan
Fans complained about how sparse and pensive “Penny Sparkle” was so they released a record that was even more sparse and pensive!  “Dripping” is the song of the year for me.
7.      Max Richter, The Leftovers Original soundtrack
Hopefully there isn’t a rule barring the same artist from appearing on the list twice. There’s plenty of minor/major tension, heightened emotional cues and Philip Glass style arpeggios to make me wish we wrote this.
8.     Electric Youth, Innerworld
This retro/future thing is too much fun. The vintage cheese ball synths, simple floor kick drum programming and earnest vocals could soundtrack the greatest ‘80s prom ever.
9.  A Winged Victory For The Sullen, Atomos
An hour of warm, immersive and pretty neo classical/drone.
10. MONO, The Last Dawn/ Rays of Darkness
Always epic and always reliable. They stripped down the arrangements but gave us two albums of contrasting moods. Look out for Tetsuya from Envy lending his trademark caustic throat work on “The Hand That Holds The Truth”
(Visit SO HIDEOUS here: https://www.facebook.com/sohideous.)