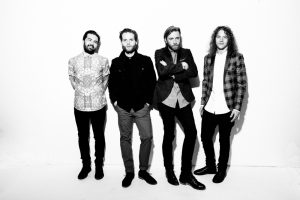 Chicago’s Empires are set to release their upcoming EP, How Good Does It Feel, on Chop Shop/Island Records on June 17. For those uninitiated, the band make romantic, arena ready rock music that flirts across genres and is stacked with earworm melodies. The EP was produced by John Congleton (Xiu XIu, St. Vincent, etc.). The track premiered yesterday on Stereogum and the EP – which was produced by John Congleton (St. Vincent, War on Drugs, Black Angels).
Ghettoblaster recently caught up with drummer Mike Robinson to talk about three songs that influenced the band during the creation of the EP. This is what he said.

St. Vincent, “Cruel”
The song “Cruel” by St. Vincent was a pretty big factor in wanting to work with John Congleton – There was something about the production that seemed like it would cater very well to the demos we had at the time.

Sparklehorse, “King of Nails”
The Sparklehorse song just sounds absolutely insane and is an amazing song. There’s a guitar tone in there that will melt your brain.
(Here is Empires’ video for “How Good Does It Feel”: