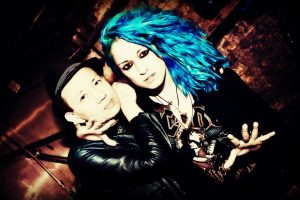 Rock duo John & Brittany have officially announced the release of their new EP Stories To Be Told, set to drop on October 7. Their boy/girl dynamic captures the sweetness and tension of predecessors like Lindsey Buckingham/Stevie Nicks combined with the punk ferocity of The Kills.
After releasing their 2013 debut full-length album Start Sinning, Philly songwriters John Faye and Brittany Rotondo saw the album’s title track catapult into heavy rotation on Sirius XM’s Little Steven’s Underground Garage, and place third in LSUG’s year-end listener’s poll (Joan Jett was #1). The music video for their follow-up single “Paper Planes” aired on over 100 video outlets in the U.S. and Canada, making it all the way to “The Freshmen” on MTV-U and to MTV.com.
John & Brittany made well over 100 live appearances within the year, sharing stages with the likes of The Smithereens, Everclear, Gin Blossoms, and Matthew Sweet, in addition to headlining their own shows at venues such as World Cafe Live and the Theatre of the Living Arts.
Enter the new 2014 EP Stories To Be Told, whose title was suggested to John & Brittany by Little Steven Van Zandt (E-Street Band). Upon first listen to the as-yet-untitled EP, Van Zandt commented to his producer, Dennis Mortensen, that each song was like a short story unto itself, and playing off the title of the record’s closing track, Stories To Be Told came into being.
Ghettoblaster recently caught up with Faye to discuss three songs that inspired the EP. This is what he told us.
We have always envisioned our sound as being very broad, kind of like taking a page from The Clash’s playbook, where they could take just about any style they wanted and adapt it so that it was still always them in the end. For us we have a few different major influences -, punk and new wave, a little bit of blues and country, and we also have a love of Spanish music. But there are a few songs that inform our new record which might come as a surprise.

“Radiation Blues” by Dax Riggs
There’s a very specific reference in our first single “St. Valentine” to the Dax Riggs song “Radiation Blues.” It’s mentioned by name twice. He is an artist that both of us really love, both lyrically and sonically. When we play “St. Valentine,” I think we are channeling the very raw feelings that go into the DNA of the song, and lines from “Radiation Blues” like “should’ve been dead like 10 times over / by the hand of your lover” definitely inform the lyrics of “St. Valentine.” The idea of the power someone else can hold over you when you are extremely close and they know where your weaknesses lie, and they never let you off easy.. “Sweet death is quick, but no not you, you dig it when I suffer.”

“Talking At The Same Time” by Tom Waits
In general, Tom waits makes records that sound completely other-worldly and from a different place and time. His song “Talking At The Same Time”is beyond spooky sounding, with a falsetto vocal that is way out of character, and also an almost woozy feel to it, kind of like the song itself is drunk. For our song “Delacroix Blues” we kind of had it in our minds that we wanted it to sound a little bit like an old warped record, so there are times when the instruments don’t seem quite fully in tune with each other, and we also have a great tack piano part played by our friend Carl Bahner, which just gives the song a very creepy vibe, very much inspired by Tom Waits. His inspiration continues in one of our other tracks “Hank The Hound Dog” which includes a piano part that is played completely atonally but in a specific rhythm that is repeated throughout the song. It’s all meant to depict one man’s descent into madness. We definitely thank Tom Waits for that aesthetic.

“Harvest Moon” by Neil Young
This is probably the last song any casual listener or observer of what we do would think might influence us, but I really see this as a template for the title track “Story To Be Told.” The song was inspired by our experience volunteering for an organization called Musicians On Call, which brings musicians into hospitals to play for terminally ill patients. One particular young man truly inspired us with his bravery and his appreciation of music when we visited him. He sadly passed away only weeks after we met him, and the words to the song came pouring out straight from Brittany’s heart. To me, the lyrics were so beautiful in their simplicity, much like “Harvest Moon” is. I didn’t want to complicate that in anyway with the music, so I really wanted the instrumentation to be sparse yet supportive of the melody. I think that’s one of the best things about how Neil Young writes, especially his more acoustic, simple songs. I think we achieved the simplicity we were hoping for.
(Stories To Be Told is set to release on October 7th, 2014. For updates, please visit: http://johnbrittany.com/.)