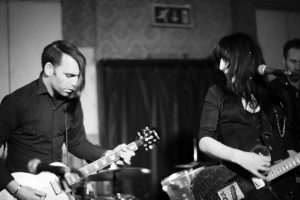 United by a love of proto-punk trash, rock n roll and noir romanticism, Emily Breeze (vocals, guitar) and Rob Norbury (guitar) met during a licentious four day drinking binge in 2013. Retreating to Bristol with a handful of records, some stolen stilettos and a primitive drum machine, they began writing and performing as a two piece, rigidly insisting that they should only use equipment that could be carried by public transport.
This minimal set up generated interest which led to the band recruiting production/synth maverick Adam Coombs in 2014 to complete the line-up.
Named after the legendary Warhol actress, Candy Darling’s Emily Breeze recently spoke with Ghettoblaster about the inspirations for their “Money” b/w “Temples” single, released on September 1 on limited edition pink vinyl and as a digital download. This is what she told us.
“Ghost Rider” by Suicide is a master class in minimalism. The nullifying repetition of Martin Rev’s keyboard line and Alan Vega’s sepulchral rockabilly incantations take you on death trip through all forms of love, suffering and madness. This song strips out all of rock’s cheap shots and tawdry theatrics, leaving only a malevolent prayer hell bent on fucking your ears whilst the whole world goes up in flames.
The riff on our “Money” could be filed under thievery or flattery – there is no denying that our debut single was born in the starless and bible-black shadow of “Ghost Rider”.
Suicide – “Ghost Rider”

The lyric to “Money” pertains to an ugliness which exists inside us all. Here, motivated by greed, pride and envy the protagonist is propelled to conquer the world, just to see a flicker of regret in an ex-lover’s eye. This is a revenge song delivered by an unreliable narrator. The listener can choose to doubt the wild claims and delusional demands, or darker still, relate to the desperation. Pulp’s “I Spy” nails this sentiment with acerbic precision over a glittering disco beat.
Pulp – “I Spy”

The B-side – “Temples” is inspired in part by The Walker Brothers “The Electrician”. The Penderecki strings and hypnotic bass chew on your nerve endings and arouse a primordial terror which is then shattered by the celestial chorus. As the saying goes “writing about music is like dancing about architecture”. This track is beyond words.
The Walker Brothers – “The Electrician”