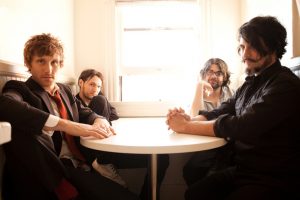 Dot Hacker is an LA-based band featuring musicians Josh Klinghoffer (of Red Hot Chili Peppers), Clint Walsh, Eric Gardner, and Jonathan Hischke. They released their debut album, Inhibition, in 2012 and are excited to show their fans what they’ve been up to since.
Formed out of conversations between Clint and Josh whilst on tour with Gnarls Barkley in 2006, the pair each introduced one another to Eric and Jonathan. Before long, a band was formed, a record was made, and friendships were born. In 2009, amongst other tours and projects, Josh joined the Red Hot Chili Peppers and began work that would make releasing and promoting Inhibition difficult at that time. Though all members are constantly working on different things, sometimes together, sometimes apart, Dot Hacker has found a way to exist.
Ghettoblaster recently caught up with guitarist and keyboardist Clint Walsh to discuss three songs that inspired their forthcoming record, How’s Your Process, which is due on ORG Music on July 1. These are the songs he shared.

Deerhoof – “Zero Seconds Pause”
I remember all of us listening to “Break Up Song” one afternoon, right around the time it came out. We had just started work on the How’s Your Process records, and when we heard it, we all felt the same thing. That connection got us excited about wanting to make a good record.

Chic – “Everybody Dance”
We would sometimes take breaks from working and play this song over and over again. Different versions, too. Reggae, punk, however we were feeling at the time. Bernard Edwards rules the world.

Scorpions – The Sails of Charon
Disco Scorps! We’d blast this in the studio, and the video is equally good. I don’t think we sound like any of these bands, but influence comes in all shapes and sizes. The guitar part at the 1:00 mark is just so good.
(Preorder the record via iTunes here: https://itunes.apple.com/us/album/hows-your-process-work/id890732239)