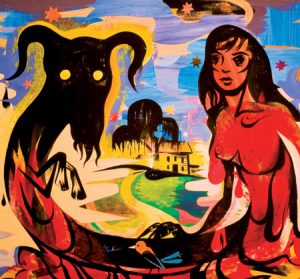 Label: Constellation
Year: 2009
Evangelista’s Prince of Truth is one of those albums that could very easily be a shelver. Playing like an avant noise jazz group doing their best rough-edged indie rock impersonation laden with dramatic swells and emotional outbursts, Prince isn’t quite the most accessible album of the year.
But for all the feedback driven ambient intros, there are cohesive moments of melody and form. “You Are A Jaguar” has it’s share of freak out improvisational moments, that’s for sure, but the core of the song is a grandiose waltz.
It’s definitely an album worth poring over, allowing multiple listens to penetrate your listening habits and create a foundation for this album to rest on. One unfamiliar with jazz might have a hard time listening to the simplistic bass foundation of “Crack Teeth” and finding melody. But for Evangelista, what the band isn’t playing is almost just as important as what they are.  Their limited arrangements create negative space, and that’s one of the hardest things to do in music.
Music is one of the arts, but it’s hard to categorize most albums the same way as a painting. Most music exists in a concrete form for easy digestion; Prince of Truth is instead a modern abstract painting, open for interpretation and able to generate an emotional response beyond the lyrics themselves. Now it’s just a question of whether or not you can give the album enough time to reveal itself.