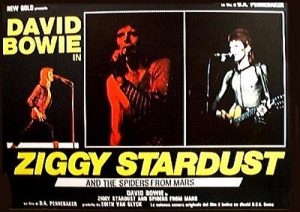 Appeaing tonight only on your throwaway TV channels!

With every new technology comes a slew of folks trying to cash in on it. Case in point — the waggleverse of Wii releases budgeted out and coded for a cheap thrill upon the release of the system. Anyone with HD channels knows this as well: there’s a whole crap load of channels dedicated to stuff that looks good in high definition without any real production value behind it.  Example? Palladia. It’s a channel dedicated to HD repeats from MTV and CMT and VH1 as well as never-ending concert footage from weird bands you don’t care about. Until last Sunday. For some reason, this gimmicky HD music channel decided to play D. A. Pennebaker’s Ziggy Stardust and the Spiders From Mars, a 1973 David Bowie concert film that was restored and released in 1983.

It’s easy to lament missing out on seeing the great 70’s rock acts perform in their heyday: no one’s denying that seeing the Stones or Bowie now would be great, but there’s been about thirty years of boring music from both that makes any show today more like a greatest hits compilation than a relevant generation defining performance.
So what did we learn from this viewing? Bowie’s range definitely wasn’t as high on stages as it was in studio (probably due to Bowie being too high himself), Bowie didn’t let Ronson play the main guitar intro riff to “All The Young Dudes,” and that “Oh You Pretty Things” is better played slower with a longer drawn out intro and more dynamic contrast.
But goddamn was it awesome to see. Gimmick TeeVee, I salute you.