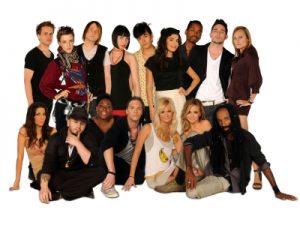 You know what? No. Just no.

For those of you who don’t know, there’s a very special group of little folks known as the Magical Elves. They have certain mystical powers granted only to their kind, like the power of empathy, or non-shitty producer intervention to keep certain designers in the competition when their work was clearly subpar. The Magical Elves, if you didn’t know, live in an enchanted forest called Bravo, where they cultivate some of the most precious TV shows and give them human interest. But what happens when one of their TV babies gets taken out of the forest, and thrown into the graveyard? (Don’t worry, there’s Top Chef under the cut, too.)

You get this season of Project Runway. If you haven’t been watching (or if you live under a rock), then you might want to know that the Weinsteins sold Project Runway to Lifetime, and with it, all the dignity the show once had. Instead of being in the fashion capital of the USA, the show was transplanted to L.A., the crown jewel of jersey knit and tacky separates where a Venti Starbucks cup still is the accessory du jour. We whittled down fourteen or so untalented designers and are left with, well, three untalented designers. Althea, Carol Hannah, and Irina, all of which would have been out midway through Season 2. This Thursday, the three will duke it out to see who will win: the annoying girl who still thinks this is a popularity contest, and really has a tacky penchant for fur, which most definitely is not coming back into trend; the weird annoying girl from Ohio who is obsessed with jodhpurs and oversized knits and also has questionable taste; or the sweet young Southern belle who’s boring clothes are actually passable and show a slight promise for future goodness from her (hey, she might have been the one who made it up right until the very end in the other seasons but got eliminated just before the Bryant Park final show). Regardless of the turnout for this week’s finale, it’s safe to say that Lifetime botched the shit out of this show, with a rotating panel of braindead judges who eliminated Ra’mon way too early when he was the one who could have actually won and had everyone proud of him. No matter how the finale turns out, you can bet my wife and I will be protesting the next season on Lifetime. C’mon, this is the network that greenlit Drop Dead Diva, a show about a pretty girl who dies and comes back to life as a fat girl in order to learn not to be mean, and also maybe how good the cake that she never let herself eat before tastes.
Speaking of the contestant who makes it all the way right up until the end but gets eliminated before the

end challenge, this season of Top Chef could not be a better display of raw, amazing talent. From the start, everyone knew there was only a small amount of talented contestants, but man, are they talented! And while the past few episodes have been about whether or not they’re going to eliminate Robin (who sucks) or force her through, Tom Colicchio and crew took back the streets last week and got rid of that suckfest, leaving us with Kevin (who’s Southern, fat, maybe gay?, and a proponent of slow food, gut laughs, and all around meat-eater deliciousness), Michael Voltaggio (who does highly-technical food science stuff without the molecular gastronomy, making him mind-blowingly awesome), Brian Voltaggio (Michael’s older brother, who’s a bit safer but well versed in classical technique, a bit quieter, and a proponent of beating his brother soundly when he can), Jennifer (who’s got amazing classical technique and worked for Eric Ripert), and Eli (a fat, ultra-nerdy Jewish young sous chef who has pulled some amazing dishes out, but can eff-up pretty amazingly too).
And while Kevin has been dominating with his simple palate and amazing grasp of flavor with his down-home cooking bent, Michael and Brian are equally talented and could take the title just as easily. Jennifer has been crumbling lately, but she’s been extremely strong throughout the whole competition, and Eli is sort of the darkhorse who blew up his own pressure cooker early in the competition but is nerdy enough to be obsessed with food to the point of delivering something amazing. Last week’s reuben benedict Quick Fire win was truly inspired, even for vegetarians. It’s the first time so much talent has been smashed into the bottle neck of the last few competitions until the finale, and it has created the best season of Top Chef yet. No, there’s not as much human drama anymore, but who needs Spike and Andrew when you’ve simply got the best young chefs fighting tooth and nail against each other?
This is why Top Chef is the better show. Since the beginning, it has been truly about the quality of food prepared, the art of being fair and balanced in judging, and lining up guest judges who’s opinions truly mattered. I dare you to find an episode where Padma or Tom weren’t around to be anchoring judges. And while Gail and Ted are missed as weekly regulars, pulling in Anthony Bourdain, Eric Ripert, and the chefs too famous for me to know every week is unprecedented. That’d be like Project Runway having Karl Lagerfeld and Marc Jacobs coming by on a bi-weekly basis. This Wednesday, I can’t wait to see who trips up, and who makes it one step closer to the finale. Will Eli pullout something amazing? Will Jennifer choke? What about the Voltaggios? They can misstep too. Either way, it has become one of the most exciting moments in reality television, yet impossible to explain to anyone who doesn’t already watch the show. And that, people, is the definition of good television.