Squarepusher and Mount Kimbie – Friday, November 2 at the Danforth Music Hall in Toronto, Ontario
By David E. Andrews & Noah D. Andrews
‘You two must be from the States… and related!’ says the round French-Canadian security person checking our IDs as we enter the Danforth Music Hall for an evening of sonics with the mercurial Tom Jenkinson.
The Danforth Music Hall is located on Danforth Avenue, a long stretch alive with restaurants and bars and other venues, south-ish on Toronto’s grid. Photos from the interwebs would have you believe that this historic building is an old cinema with theater style seating and a mezzanine, where the civilized citizens of Canada will sit and soak in the sounds from opening act Mount Kimbie before agreeing to stand and bear witness to the audio/visual assault that is Squarepusher’s latest album, Ufabulum.
That is not the case, The Danforth Music Hall has promised us primo seats on the mezzanine, but has given us a gutted floor with no seats and two bars at the East & West poles of the dance floor selling only liquor. Beaming from the rack lighting on stage is a row of giant black-light lamps that bath the re-re-re-painted concrete floor in a blue-ish psychedelic haze causing the interior of the venue to look like a fish tank filled with KY jelly. We scope out the venue a bit, the merch table is modest, selling T-Shirts that neither of us had the heart or extra cash to buy what with paying 7 bucks for a brew. We’re here for the experience anyway, a ticket stub is enough. Most of the other patrons seem to think the same, chatting and drinking in the theater’s foyer.
There are copies of Mount Kimbie’s “Carbonated” on the merch table. “This should be a good way to ease into the night, Mt. Kimbie will prolly play some stuff from that and it will be a good strange-R&B-Beats-Bass 45 minutes of music.” “Cool, well they have a bunch of cool keyboards onstage, and a Les Paul it looks like.” We both eye the one ride cymbal towards the back of their stage-left set up with trepidation.
What unfolds is a just-fine set of slow sludge-y beats, actually nothing like some of the more up-beat and polished sounds of their Hotflush releases. We knew from reading up on their live performances and being in the disgusting business of music journalism that we’d get more of an organic delivery from the two blokes ‘from Mt. Kimbie.’
Wisely, and to be dead honest, charmingly displayed in half-time rapid succession on a giant Instagram/Polaroid size square were photos of Mount Kimbie’s tour through Asia. This set us off in a spiral of mid-set chatter. “Is that Shibuya?” “Yeah, remember that ramen we had in Kyoto just after we came down the hill from Kyomizu-dera?” Both artists have Asian leaning tendencies it seems. And this very DIY presentation feels good when contemplating the spectacle we’re about to witness when Squarepusher takes the podium, a black menacing rectangle in the middle of the stage. Mount Kimbie’s set ends with a flourish of applause and several 20-somethings push through the crowd and exclaim ‘Fuck! We missed like all their set!’ Thus proving that even though the audience is composed of music-loving/snob-ing guys and their Asian girlfriends, there are the required number of rave-freaks (a couple dread-y Toronto Junglists too) and chin strokers (“You think I’m the only 60 year old dude here?” “No, but you sure are the coolest”). One thing I will chalk up to inexperience is Mount Kimbie’s sound on the night. The PA at the Danforth Music Hall is your electronic-music-unfriendly left/right line array with some tweeters on the walls in the audience. Wether it was their inexperience or a conscious choice, their sound was very muddy and only used the stereo image afforded them in rare instances, although to great delight when a skittering of high-hats danced on the walls like cyclists speaking off the stage velodrome style and height.
T.J. would have none of this weak ass shit though. Seconds after Mount Kimbie ended their set, the rich dense fog of Squarepusher’s fucking sound rolled out of a revitalized sound system. More punters began to filter onto the main floor, stage hands busily broke down Mount Kimbie’s gear, Mr. Jenkinson himself stealthy moved round the stage to plug in everything. The buzz in the audience was palpable. No one too drunk or fighting other drugs in vain, all good vibes. The maintenance lights go off on stage as a new sheet of sound descends on us and the Squarepusher “Do You Know Squarepusher?” sideways-triangle-boomerang logo is emblazoned on the revealed LED display that has been hid by Mount Kimbie’s projection screen thus far, like a beacon from a long dark tunnel. We hoot and shout in pure anticipation, “This is going to be fucking sweet” as bass pressure pushed against our shins and chests from now apparent bass bins somewhere on the stage. 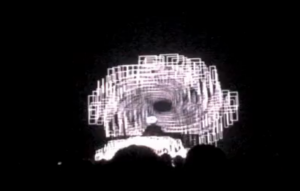 Squarepusher takes the stage and plugs in his LED helmut into the podium that houses all of his gear. The crowd quiets a bit and someone yells ‘We love you!’ to which Tom replies ‘I love you all too’ and then gets to work. All 3 LED displays, the one on the front of the podium, the giant one behind Squarepusher hanging from the rafters and the one right in front of Tom’s grill light up as the skippy beat of “Angle Integer” comes pumping out of the speaks. This track is off of the “Enstrobia” EP that, we believe, you can only get if you purchased the super-duper $85 edition of Ufabulum. So to say that the show started off with an inside joke would be to fall into that trap and say also that Squapusher’s music is impenetrable. Go seek that track out on YouTube, its a smart synth pop tune for lack of better words. We’re not sure if everyone in the audience knew the track, even we had to go back and figure out what song it was after the show, but everyone enjoyed their first taste of the forced-perspective abstractness of the LEDs and Tom’s mastery of sound design.
Doubling back a bit, also taken from the Enstrobia EP was “40.96a” which is a live recording, so not sure if it was being played live or just the recording from the Green Man Festival in 2011 when it was recorded. “40.96a” was being played while the Squarepusher logo was staring us down. As the drums from “Angle Integer” stopped, Tom paused for some applause and then the first track from Ufabulum “4001” started up.

Two things here, it should be noted that all of the LED displays are also being programmed by Tom. Which means that like the audio he has the ability to manipulate the LEDs on the fly. We’ve only this one show and various YouTube clips to compare and decide how much improvisation with the LEDs was going on, but we’d like to think there was more than none. Frequently songs would be man-handled into ring-modulated sheets of noise only to snap back into shape as Squarepusher pushed the sound further and further from their original sequences, sometimes the LEDs would follow in a similar fashion, sometimes the screens would go blank at the end of a song and Tom would be still playing with the sound.
The other note is that all throughout the show Tom, mid-song, would whip the crowd into an absolute frenzy just by beaconing for us and yelling ‘Come on!’ in a way that suggests that we follow him further in his jaw-dropping collaboration with machines. It gave us the feeling of “Okay, this music, this visual display is all very radical sensory assault, but because we can see that there’s still a human at the controls so we’re going to follow you further into this experience.”
“This one is ‘Red in Blue’.” “I know.” “Oh, right. Hey Dad! I can see his bass!” During the bass-weighted dirge of ‘Red in Blue’ we learned two things…
1) The LEDs can also do color. Having gone through the first half of Ufabulum in black & white, ‘Red in Blue’ visually and aurally acts as pallet cleansing piece of ginger, the audio reminding me of some of Ulpio Minucci’s synth work on the BGM of Robotech.
2) That bass is there for a reason.

At this point we realize that Ufabulum will continue to be played as it appears tracked on the album, as “The Metallurgist” starts up. Which is fine, Squarepusher has always stated that Ufabulum is a performance piece/album and that the CD you bought is just a souvenir. I don’t think anyone felt slighted by the fact that Squarepusher “played his album”. There was improvisation within the tunes and you sure as hell are not going to get the full effect of the LED display by watching a video.
One surprising thing about the tracks, we had always thought that “The Metalurgist” was the most intense track on Ufabulum, this is not the case. The first single from Ufabulum “Dark Steering” was the centerpiece for the show. “Dark Steering” was a 10 minute explosion of awesomeness.
Squarepusher managed to push the limits of the Ufabulum sound even further with the performance. “303 Scopem Hard” and “Ecstatic Shock”, the last two Ufabulum tracks, felt a bit like going through the motions after the sensory overload of “Dark Steering”. Thus far the performance was clocking in at just over an hour, Tom took another opportunity to whip up the crowd as Ufabulum came to an end.
“Tom! The Bass!” we yelled, referencing the nickname that some of Squarepusher’s friends had given him around the time of “Hello Everything” when he stated in an interview he was doing pub gigs around his home in the UK. And sure enough T.J. picks up his instrument and gives it a good slap. A blast of overdriven effected bass comes over the audience. Squarepusher then goes on a 30 minute improve tear that at times sounds like beefed up versions of “Panic Massive”, completing the Enstrobia EP, and/or some of the “Seb” tracks from the “Solo Electric Bass” record. The LEDs are still turning the massive chunk of bass guitar wrath into a visual graphic as Tom simultaneously displays his virtuosic bass playing and signal processing. And he’s still whipping the crowd up.
90 or so minutes after he took the stage, Squarepusher thanks us all, bows, and leaves the stage still growling with ferocious noise. We stand around for a little, knowing that we should want an encore, but also not being able to fully process the sensory assault we’ve just been though. “You wanna head back to the hotel?” “Yeah, let’s go grab a beer.” We leave the venue skipping the encore of more bass improvisation, “Journey to Reedham” which Tom the Bass has been encore-ing at other shows, and a proper version of “Seb 1.01”, spill onto Danforth Ave and immediately begin to try and put our minds back together after having them sufficiently blown right out of the back of our heads.