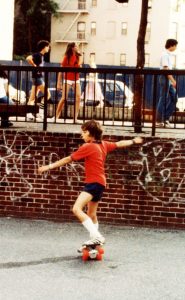 Timo Ellis skating in the ’80s

Led by ultra-prolific man-machine Timo Ellis, whose previous collaborations include Melvins, John Zorn and Cibo Matto to name a few, Netherlands churn out new jams by the metric ton. Since the late 2013 release of their last LP, Silicon Vapor, the Brooklynites have tracked more than 20 new songs, of which the Noisey-released “Thrombosis” is one (http://noisey.vice.com/blog/netherlands-are-ushering-in-a-new-wave-of-pop-metal).
While the band firm up plans for the release of their next EP, Ghettoblaster caught up with Ellis, a former skater, to discuss his early love for the sport. Although he gave it up around the time he discovered a passion for music, one can’t fault him when you hear the Dio meets Drive Like Jehu cacophony he is making instead.
When was this picture taken?
This pic was taken (I think by my dad) in the Hunter High School playground on 94th St between Madison and Park, in Manhattan.
How old were you at the time?
I was 10 in the spring of 1980.
Did you hang at that playground a lot?
I once got randomly severely beaned by someone playing stickball there, got chased a few times, and later got drunk there for the first time.
What kind of deck were you using?
I’m pretty sure that was a cheap Hobie deck with Kryptonics wheels – I can’t remember what kind of trucks it had!
Were you pretty good?
I really only ever did basic maneuvers: kicking ass down hills in the park, tic tac-ing, attempts at hanging 10, and going down stairs. I had no real awareness of any stylistic innovation going on at this point.
Do you still skate?
My interest in skating sorta significantly waned later that year when I had my “music epiphany” and started playing drums. Also, this board got stolen from me, like right out of my hands by a bigger kid who wanted it a few months after this pic was taken. NYC was different back then.
(Visit Netherlands here: http://netherlandsband.com/.)