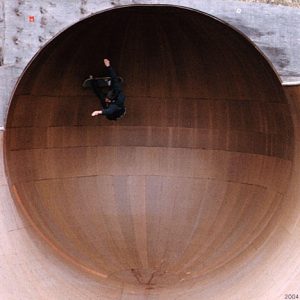 Approaching 40, not only does Converge/Doomrider’s Nate Newton have feet firmly planted in the hardcore record books, but he’s still holding down his passion for skating, a “trick” that few of his peers have manged to pull off.  Ghettoblaster caught up with him to discuss it.  This is what he said.

When did you begin skating and what is it about skating that continues to appeal to you?

I started skateboarding when I was five years old.  So that was about 1980.   I don’t really know what it is that continues to make it appeal to me other than the joy of just rolling and going fast.
Do you play places on tour that also allow you to skate inside or outside?  What are the best places you’ve skated on tour?

I go out of my way to find skateparks or spots.  I’ve ridden backyard pools on tour,  concrete parks,  backyard ramps, great street spots, ditches….you name it.
One of my favorites was the skatepark in Wichita Falls, Texas.  I was on tour with Doomriders and we stopped at a hotel at like 2 in the morning.  I randomly looked out our hotel window and directly across the street was a Grindline park with lights.  I didn’t go to sleep that night.
Texas, Arizona, and New Mexico are heavy for ditch skating.  I’ve skated so many great ditches that were randomly next to a gas station or a hotel.  Skating Washington Street for the first time was awesome.   That was a humbler.  Burnside whenever I’m in Portland, and FDR whenever I’m in Philly.
What is the most difficult trick that you’ve landed?  How does the feeling of landing that compare to the feeling of conquering a difficult riff or part in your music?

I’m almost 40.  The biggest trick now is just to keep skating.  I know a lot of people my age who can’t seem to do that trick anymore.  Music and skateboarding are very similar to me and I approach them both the same way.
What kind of deck, trucks, wheels, or other gear are you currently using?

I feel like I’m working at a skate shop and a ninr year old is asking me about my board.  I just ride whatever is 8.5 inches wide,  and 56 mm wheels.  Indy’s and Bones swiss forever.
What other bands who have members who skate have you toured with and skated with?  Were you impressed?

Not many to be honest.   Most people in bands use the “I can’t hurt my hands” bullshit excuse, which really just means “I don’t really skate”.  Jeff  from Modern Life Is War,  Foxy from SSS, Grumpy from Sweet Cobra, Elliot from Touche Amore, Jake from I Exist,  Blake from Ramming Speed.  I know I’m forgetting a bunch.
Impressed?  I don’t really look at it like that.  If you’re down to go roll then we’ll be friends.
Do you seek out skate shops on tour?  What are the best ones?

Eastern Boarder,  Shrunken Head,   Stratosphere, NJ Skateshop, Orchard, Cardinal…. all great shops.
What is the worst injury that you ever suffered skating and how did you recoup from that?   Did it affect your playing?

I’ve torn both ACLs,  meniscus,  broken almost all of my ribs, broke my right hand and had metal pins put in it,  broken ankles, fractured wrists….. I have sorta recouped from all of these but not really.  That’s just skateboarding.  Pay in pain.  The broken hand affected my playing for a little while, but that was because I had to wear a brace.  I can still get it done.
Which of your band’s songs are the best to skate to?