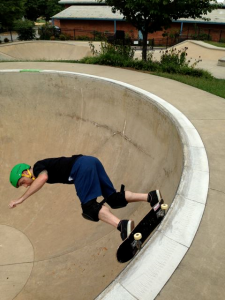 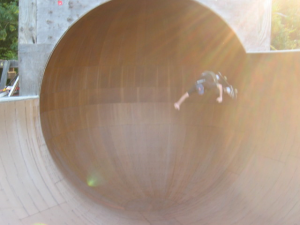 Police and Thieves are a band that produce a punk sound that is simultaneously nostalgic, yet distinctly their own. The Washington, DC band carries the figurative musical torch for the city’s scene by having demonstrated a continuous commitment to DIY ethics and socio-political discontent.
We at Ghettoblaster also happen to know that guitarist John Riley is as skilled on four wheels as he is at guitar.  So we caught up with him to talk skating.  This is what he said.
When did you begin skating and what is it about skating that continues to appeal to you?
I got my first real board on my 16th birthday, so 1988. I guess, generally speaking, I have more in common with skateboarders…whether it’s music, politics or other things like being straight edge. You used to see someone with an Ollie hole in their shoe and they were most likely a cool person.
What I still love about skateboarding is that it is still fun whether you go out alone or with others. I met some great people skating. The skate community is really tight and positive. I’m not great by any means and when you ride with others who are better, they get stoked when you do a trick or line that may be ridiculously easy to them, but they realize when you skate well for yourself and support you for that.
Do you play places on tour that also allow you to skate inside or outside? What are the best places you’ve skated on tour?
We played a fest on a short tour (we’ve only done short tours) in Vermont where we played on a half pipe. My amp was partially up the transition, it was pretty awesome. There was an outdoor park and I rode on a borrowed board for a bit. Besides being the sole vegan, I am the only one who still skates semi regularly, so we didn’t ever hit any skate parks.
What is the most difficult trick that you’ve landed? How does the feeling of landing that compare to the feeling of conquering a difficult riff or part in your music?
See Nate Newton’s answer…haha…still skating with all the other stuff going on is a trick I get stoked on. I’m not a big trick guy, figuring out lines in a gnarly back yard pool is about as complex as it gets for me…making it over the light I suppose is the big one for me or a front side grind on pool block? I also feel a sense of accomplishment when a troubling part or riff is figured out, takes the same practice and you can’t get too frustrated. The difference with music is that it’s more of a team mentality where I feel skating is solo.
What kind of deck, trucks, wheels, or other gear are you currently using?
Independent trucks, nice and loose. 60 mm wheels. I’ve had Bones skatepark formula on for a while, I may try some Speed lab wheels next.  The owner is a Baltimore guy. I’ve been riding 8.25 Scum decks lately.
What other bands who have members who skate have you toured with and skated with? Were you impressed?
I met Nate Newton (Doomriders/Converge) skating down in NC, He’s a ripper and super fun to ride with. I got to ride with Jason Farrell (Bluetip) at the Vans park in VA, meaning I skated other things while he did sick airs and inverts on the vert ramp. I think I know more DC area guys in bands that I skate with…mostly due to our lack of touring I suppose.
Do you seek out skate shops on tour? What are the best ones?
I’m pretty simple as far as my skate setup, so it’s not really a priority to hit shops on the road.  Vegan food is probably a greater priority for me. My good friend Eric Barkow owns a shop in Columbus called Embassy, so I’d say they are the best as well as Fredericksburg Skate shop, which is now Magic Bullet Records and Skateboards.  I haven’t been down there in a while, but Mark Eyestone is a super good guy as well.
What is the worst injury that you ever suffered skating and how did you recoup from that? Did it affect your playing?
I feel like I’ve suffered more psychological damage than physical. I’ve slammed hard before, but nothing broken…but I get more freaked out than anything and don’t push myself as hard in fear of getting hurt. No injuries that affected my playing, those happen in the kitchen with careless use of sharp tools.
Which of your band’s songs are the best to skate to?
I’d say “Exit Strategy” would hopefully be a good one…either “All Saints” or “Urgency of Now” off the newest record would hopefully make a good skate soundtrack as well.
(Visit Police and Thieves here: https://www.facebook.com/policethieves.)