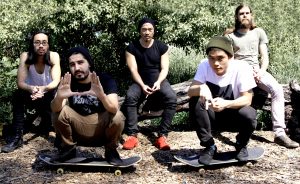 New Atlantis Records announced the April 14 release of Sun Square Dialect, the seventh full-length album by LA’s Upsilon Acrux.  Founded by guitarist Paul Lai almost two decades ago, the ever-morphing Upsilon Acrux has been described by Thurston Moore as “amazing” and by Nels Cline as “some off the most detailed compositions I have ever heard.”

Inspired initially by King Crimson, among others – 1999’s debut album was titled In the Acrux of the Upsilon King – the band is now its own inscrutable beast. Hyper-complex, brutally dense, Upsilon employs two drummers, clean guitar tones, Rhodes piano and horns, in the service of polyrhythmic compositions that twist, turn, squirm, and confound. Something like Don Caballero times ten, Upsilon Acrux should dazzle fans of bands like Don Cab, Behold The Arctopus, and Mick Barr’s many projects, and of their predecessors in the realms of prog, krautrock, and free jazz.

Sun Square Dialect, Upsilon was recorded at Infrasonic Sound (The Jesus Lizard, Death Grips) and The Record Plant (in the room where Appetite for Destruction was recorded), and was mixed and mastered by Pete Lyman (Omar Rodriguez-Lopez, Xasthur).

Ghettoblaster recently caught up with Upsilon Acrux drummer Dylan Fujioka to discuss one of his favorite pass times besides music, skating.  This is what he told us.

What are the best places you’ve skated?

Monrovia Skatepark is fun, but really just being on a board is where it’s at.

Noah, our guitar player, has a backside flip on 60 percent lock with added style points because he has to wave his arms behind his back which makes him look like a bat. I can switch ollie to manual for about two feet. I impress myself with that one and that’s all that matters.

The feeling of landing a difficult trick and nailing a difficult part is pretty similar. In Upsilon it’s all about repetition until the part feels right and complete just like any trick. Once done correctly you want to party.

What kind of deck, trucks, wheels, or other gear are you currently using?

Any 8.0-8.5 deck with Indys and Spitfires. Noah has a boarders deck that looks like the Lakers logo, its tight.

What other bands who have members who skate have you toured with or skated with? Were you impressed?

Steve Lee and Eddie Kim from Mangchi can “shred.” Henry from Petrichor really impresses me with his bails, he’s able to basically flatten out his entire body in the air before hitting the ground, he only smoked a pebble too. He kinda looks like that one Jordan dunk from the 88 slam dunk contest.

Do you seek out skate shops on tour? What are the best ones?

Not really, we are from LA so the best shops are here. Shout out to S.O.B in Montebello!

What is the worst injury that you ever suffered skating and how did you recoup from that? Did it affect your playing?

Broke some fingers, rolled some ankles, nothing too gnarly. Our old friend Phillip tried to ollie over a tennis net while our other friend Omar lifted it up a bit as a joke. Phil clipped the net, slammed his head into the ground and started seizing up, pissed himself too. At first we were really mad at Omar, but then the piss came out and it was funny. Phil is OK now I think. Nah, he’s probably not.

Which of your band’s songs are the best to skate to?

I’d say none. Our songs would probably get you out of rhythm. You’re better off listening to skate classics like Modest Mouse, or Pailhead. Oh that Moving Units song Leo Romero used is great too.