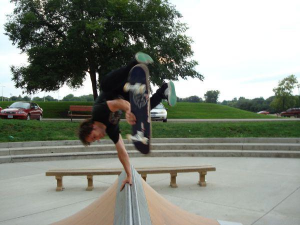 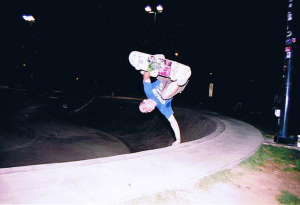 Formed by the members of Baltimore’s Blank, D.C.’s Latebloomer, and Chris from WV’s Hefty, Cross My Heart combined punk, power pop, hardcore, and rock influences to create a mellower loud / soft dynamic. Cross My Heart went on to release lauded records on Deep Elm and Dim-Mak.  Currently, guitarist Dwayne Bruner is holding it down with Cult Control. a band started earlier this year with Mike Stearns and Tony Pence from Deep Sleep, and Kevin Mitchell and Sue Werner from Blackwolf Beach. they play very fast hooky melodic punk (think Adolescents, early TSOL, maybe some Descendents, mixed with two guitar era Minor Threat or something like that.)
Ghettoblaster recently caught up with Bruner to discuss a passion outside of music, skating!  This is what he told us.
When did you begin skating and what is it about skating that continues to appeal to you?
I started when boards were skinny and plastic back in the ’70s.  My mom got a fiberglass board called a Jensen and when she wasn’t trying to roll around I would grab it and take off down the local hills. The older kids would come over and borrow sheets of plywood from my dad to make kick turn ramps and stuff. Fun times!
Do you play places on tour that also allow you to skate inside or outside? What are the best places you’ve skated on tour?
It’s happened a few times, yeah. I’ve done a few shows on the flat bottom of half pipes over the years. Indoor skatepark shows were always fun. I did Warped Tour a few times, so that was rad traveling with a vert ramp and street course that was set up for you to play on every day.
I go out of my way to hit cool spots on tour. China banks was a fun one, lots of crazy skateparks. Boise has a couple of fun ones that I’ve hit on days off, there was one in Tyler Texas that was insane, just a total X-Games practice course, street ramps everywhere, three half pipes and a spine. I am lucky being from DC, there are tons of bowls here now so I can pick and choose from probably twenty different parks within easy driving distance. Oh, and the Vans park ruled. I’ll always miss that place in the winter.
What is the most difficult trick that you’ve landed? How does the feeling of landing that compare to the feeling of conquering a difficult riff or part in your music?
Wow, I don’t know about this one… “hardest” vs. “most impressive” maybe? I think the hardest things I have done probably were tech things, flip tricks and stuff that wouldn’t rate much interest or gaps back in the day.
Backside nose blunt slide transfers over a spine, or varial 180 inverts to nose over spine are probably hard for most people, but didn’t feel that hard to me. Those probably looked more impressive than most stuff. Oh yeah, 360s coming in fakie on half pipes. Those are hard! Anything where you’re turning and coming in fakie on ramps. Gotta remember to get your head around and look the other way!
As far as being comparable, I would say that yeah, it’s a similar feeling. Especially if it’s a trick or riff that you’ve been chasing for a while and you finally get it, it can be a rush.
What kind of deck, trucks, wheels, or other gear are you currently using?
Haha, um… Thunder trucks are a must have, leave them wide open! I like being able to turn. I think I am riding some 54mm Spitfires right now, and my deck is actually an Anti-Flag band deck. I had a few of them laying around from when I used to guitar tech for them. The price was right and the shape is decent.
What other bands who have members who skate have you toured with and skated with? Were you impressed?
Chris and I used to skate a fair bit on Cross My Heart tours, I tried to make it a point to do at least one hand rail per tour. I think I pulled that off, I can’t remember. Jay Navarro from Suicide Machines was fun to skate with on Warped. There were a bunch of dudes who rolled around, but he’s the one I remember being stoked on.
Do you seek out skate shops on tour? What are the best ones?
Sometimes… If I need a board or something I will. Pro Quality in Louisville, KY will always be my favorite skate shop because of how much time I spent there as a kid and the amount of fun I had hanging around there.
What is the worst injury that you ever suffered skating and how did you recoup from that? Did it affect your playing?
Oof, probably broken or impacted fingers. It happened more than once unfortunately and they still hurt from it sometimes.
Right before Warped ’98 and recording the first Cross My Heart album, I was out skating with Camden one night and did a backside 180 out of a bank over an armco barrier. I made it but it was kind of dark and when I swung around my fretting hand went index finger first into a brick wall. I couldn’t bend it for months and there were parts I had to record in alternate tunings to get around not being able to fret. “fun.” Somewhere there are funny pics of me recording guitars with a splint on.
Which of your band’s songs are the best to skate to?
I would say all of the Cult Control songs are probably better to skate to than most of my previous bands songs were. A lot more fast and aggro like melodic ’80s punk style. As far as Cross My Heart songs, maybe “Today I Discovered the World”, “Self-Loathing Bastard” or “London Bridge”?