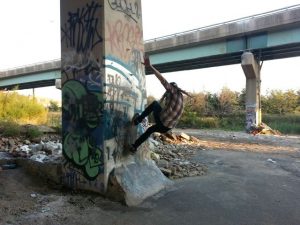 In June, Boston thrash-infused grinders Ramming Speed released what may amount to the perfect state soundtrack in their Prosthetic debut, Doomed To Destroy, Destined To Die. The album was recorded at GodCity Studios in Salem, MA with Kurt Ballou (Skeletonwitch, Converge, Kvelertak) and features 13 crushing tracks which showcase the bands unique sound – a combination of d-beat punk, aggressive thrash, grind, and NWOBHM.
Labelled as “one of the hardest-working bands in heavy metal” the band has shared the stage with acts such as Trap Them, Holy Grail, Torche, Municipal Waste, Toxic Holocaust, Phobia, Black Tusk and Saviours, and earlier this year they did tours with Goatwhore, 3 Inches of Blood, Revocation, Valient Thorr, and Gypsyhawk.
And still Ramming Speed guitarist Blake Charlton managed to find time to shred.  This is what he told Ghettoblaster about being badass and punk as fuck for skating.
When did you begin skating and what is it about skating that continues to appeal to you? I started skating when I was 8 or 9 because I thought the older dudes in town were badass and punk as fuck for skating. I still get stoked to skate because skatin’ and Satan go hand in hoof!
Do you play places on tour that also allow you to skate inside or outside? What are the best places you’ve skated on tour? We recently played in Boise and ended up skating a mini ramp inside a separate venue after the show, at a place called The Shredder. A lot of towns nowadays have pretty good outdoor crete’ to shred too. Ha ha As for best? I’d rather say worst, Johnson City, TN sucks! There’s so many good places to skate on tour it would be a boring list!
What is the most difficult trick that you’ve landed? How does the feeling of landing that compare to the feeling of conquering a difficult riff or part in your music? Rush roundtrip beer run while stoned out of my mind is definitely the best trick winner.
What kind of deck, trucks, wheels, or other gear are you currently using? Anti-hero board, Indy’s or die, and whatever else I nabbed at Orchard skate shop in Boston!
What other bands who have members who skate have you toured with and skated with? Were you impressed? I was in a skate-centric band that toured for years, so countless dudes have been in on the sessions, though I’ll give it up for ANS from Texas for being some of the most fun. Oh and Valient Thorr – who we’re on the road with right now! It’s less about being impressed and more about having a good time and no one getting stressed out trying something too crazy. FGT!
Do you seek out skate shops on tour? What are the best ones?
Orchard in Boston, KCDC in Brooklyn, and Eric Z’s Refuge skate shop in MI.
What is the worst injury that you ever suffered skating and how did you recoup from that? Did it affect your playing? The only injury that has and constantly affects my playing is the left wrist jesus palm sprain. Too many times bendin’ that sucker back so it’s always a bit sore.
Which of your band’s songs are the best to skate to? The title track from the new album (Doomed To Destroy, Destined To Die) or “Extinction Event” on the same record! Skate or Die, Skate and Destroy!