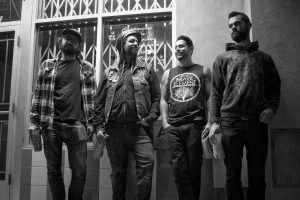 From San Diego, Griever features vocalist/guitarist Alex Jacobelli and drummer Cory Groenenberg, both members of former Deathwish Inc hardcore punkers Lewd Acts. In Griever, Jacobelli belts out world-weary gruffness and lights up the skies with radiant guitars, while Groenenberg drives forward, steady and straight as a tunnel-borer. Along with guitarist Orlando Ramirez and bassist Wes Sisk, they pound out an impassioned racket – a heavy, rock-solid version of post-hardcore that pummels and uplifts, equally – inspired by the melodic sludge of the Melvins-Karp-Floor-Torche circle as well as the garage punk scene epitomized by hometown San Diego label Swami Records (Hot Snakes, et al.).
Their forthcoming record, Our Love Is Different (due out via Vitriol Records on February 2) was recorded by Tommy Garcia and Alex Jacobelli at SDRL and Thrill Me Studios, and mixed by Jacobelli at Thrill Me. The album was mastered by Nick Zampiello (Converge, Coliseum) at New Alliance.  Our Love Is Different follows 2011’s Inferior EP, also on Vitriol, and a 3-way split with VYGR and At Our Heels, on Creator-Destructor Records.
It is absolutely no surprise that with the band’s willingness to flirt with danger and swing for the fences, that they have some avid skateboarders amidst their ranks. So, Ghettoblaster caught up with Jacobelli to discuss his affinity for the sport and the perils of drinking and skating.
What are the best places you’ve skated on tour?
We played a house show in northern California a few years back, and they had half pipe in the backyard. It was awesome because they had a BBQ going and everyone was skating. Beer everywhere. It was paradise. Everything was going wonderfully until someone got thrown into a pile of fluorescent lights in the garage where the show was being held. Uh-oh.
What is the most difficult trick that you’ve landed? How does the feeling of landing that compare to the feeling of conquering a difficult riff or part in your music?
Out of the four of us, Orly, our guitarist, says he 360 flipped a six stair when he was 17, but hear you me, I don’t believe a goddamn word of it. Pics or it didn’t happen. On the more modest side of the spectrum, our bassist Wes proudly reports floating a curb. Hold your applause, please. In terms of how it feels compared to the music we play, I’d say different. Both can give you a feeling of release though. 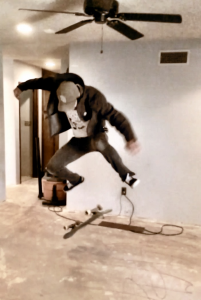 What kind of deck, trucks, wheels, or other gear are you currently using?
To be brutally honest, we’re broke as shit. Beer and rent are some expensive shits. Blank decks from active and trucks leftover from high school.
What other bands who have members who skate have you toured with and skated with? Were you impressed?
Our northern brothers, Baptists, shred. I think Danny worked for a skate company in some capacity, but since he’s always drunk, I missed all the details. Yes, very impressed.
Do you seek out skate shops on tour? What are the best ones?
If we had time, maybe, but we’re always late as fuck. Typically we’re looking for coffee shops and liquor stores. This is the third time we’ve mentioned booze in this interview. I think we have a problem.
What is the worst injury that you ever suffered skating and how did you recoup from that? Did it affect your playing?
Orly broke his nose after a failed attempt at a pop shuvit brought the board up directly into his face.  Also, our drummer Cory was recently skating home from the local watering hole and took a pretty hard fall. He thinks he kicked the wheel while he was pushing, and fell down and hit his head, hard enough to cause it to bleed, and his hip, which had a wild bruise. I say “he thinks” because he was too drunk to remember. He played like shit for two weeks. I think we have a problem.
Which of your band’s songs are the best to skate to?
Baptists used our song “The Forgetter” for a little skate video they had, so maybe that one? On our new record, I would say “The Tie That Grinds” would be the most skate-able tune. Or just put on Minor Threat and call it a day. WHATEVER.
(Catch Griever live here: Feb 15 – San Diego, CA @ Tower Bar w/ Enabler)