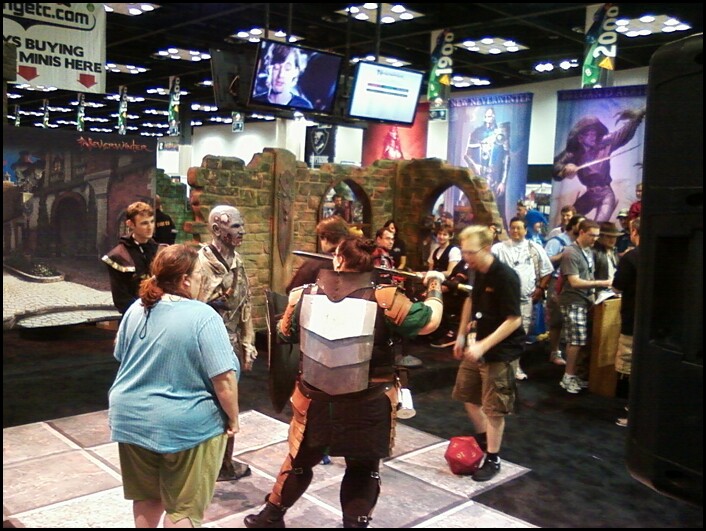 Hurray! No one broke into our car overnight and the water heater in this place much be huge. Nine pleasant showers later, we’re back downtown for day two.
Having spent most of yesterday just trying to get a grasp of all that was going on, the thought was to spend most of today going a little more in depth into a few different games. 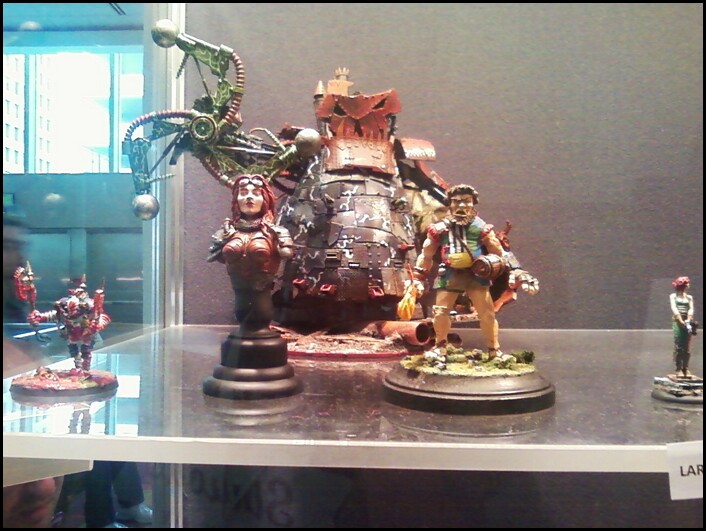 The first game of the day was Dominion – a game I’d been hearing a ton about, but had been slightly skeptical of. Like I said earlier, I’m generally more of a board game guy and Dominion is a card game, albeit a self-contained card game (albeit again, one with many available expansions). Still, after testing out the game in Rio Grande’s separate free gaming room I was pleasantly surprised by the inventive gameplay. It’s a deck-drafting game – ie. you build the deck as you play – which I’m not familiar with so I’m not sure if it’s the best of its kind, but I wouldn’t be surprised if it was. 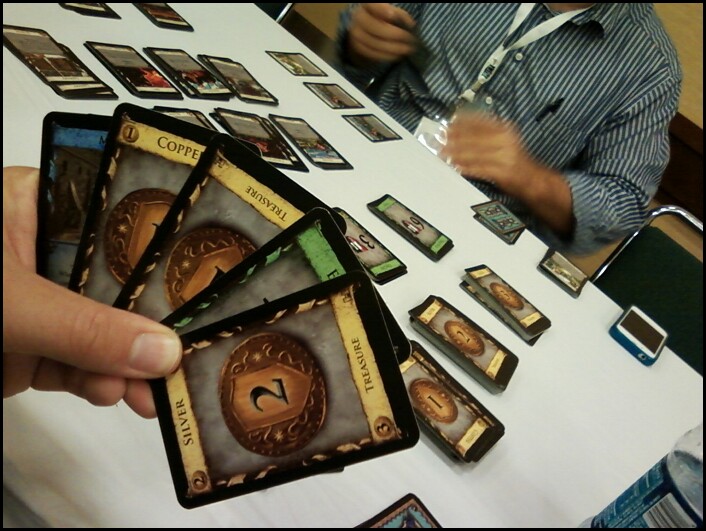 Cryptozoic Entertainment’s Food Fight was up next. Demo’d on red-checkered diner table clothes, complete with silverware, placemats and the works – it was hard not to want to play this game. A simple combat-driven card game, Food Fight pitches Mean Burritos, Medic Mustards and Private Soups against each other at three separate battlefields – breakfast, lunch and dinner. The art is neat, the game play is fun and fast, but at $30 the price tag did feel a little high. 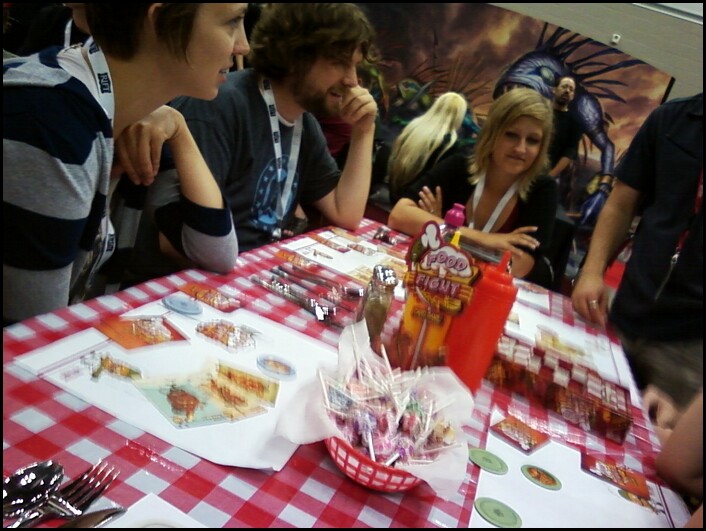 One side effect of Food Fight was reminding us that it was time for lunch, which we grabbed at the nearby Rock Bottom Brewery (unfortunately it wasn’t Gen Com themed or decorated, but none-the-less tasty).
After a quick bite came some people-watching concentrate as the Costume Parade snaked it’s way through the halls. Old-aged Link, Tweenage Starcraft Marines, scantly clad Poison Ivies and orc barbarians – all out on display.
After this, we decided to commit the rest of our day to Mayfair games, who were offering some enticing tiered incentives for playing their demos. First up was Pillars of the Earth, which I had never heard of before but proved to be a real blast. Based off of Ken Follett’s best-selling novel (which I’ve never read) players work together to build Kingsbridge Cathedral. Whichever player best utilizes their workmen and resources, while avoiding all the issues associated with building a cathedral in 12th century England wins. 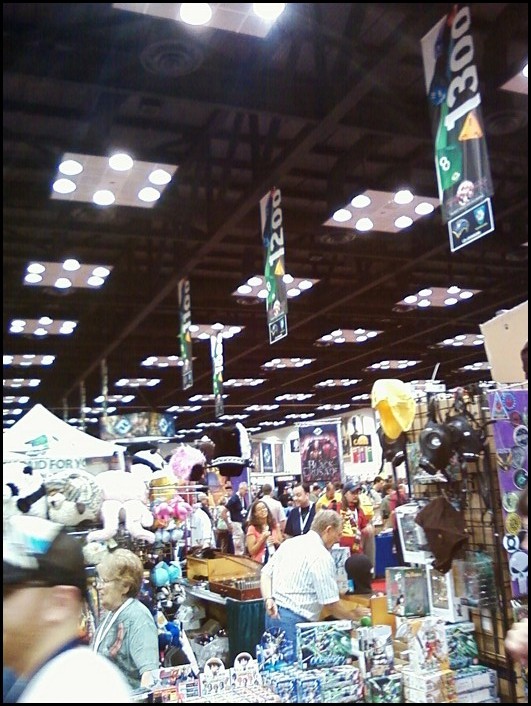 I’ll be honest, we only played the next one, Wacky Wacky West, as an easy way to get our last needed demo credit for the special Catan board and 50% off coupon. It was a pretty simple and fast game of building railroads, trails and rivers, all in an attempt to cover your opponents property while protecting yours. If you have little kids that want to play games with you, this would probably be a good option, but that aside… meh.
Finally, while the vendor hall was closing and we were deciding on how to spend our coupon we got a quick explanation of a pretty unique game, Nuns on the Run. In this game there are two player types – nuns on the run and the mother superiors that are after them. Movements are recorded in secret, and your location is only revealed if one of the mother superiors stumble on to your path. It sounds cheesy and the art definitely looks cheesy, but honestly – on a whole – it looks like it could be pretty fun!
After closing down another day at the vender hall, we decided to take in some of the films being screened at the nearby Westin Hotel. Remember freak flag? Well, while waiting for our films to start, some of the people there for the anime provided some of the best people-watching of the entire weekend. After about an hour of that, the comedic horror shorts event started, featuring Night of the Living Spuds, Rigamortis: A Zombie Love Story, and Post-Apocalyptic Zombie Shotgun Madness. Like any independently made horror movie, the results were mixed but packed with a lot of campy, good-natured fun. 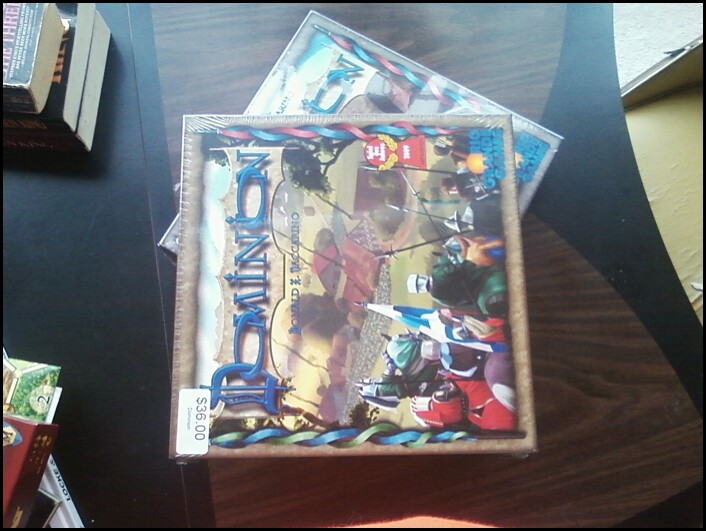 Designer’s description: “You are a monarch, like your parents before you, a ruler of a small pleasant kingdom of rivers and evergreens. Unlike your parents, however, you have hopes and dreams! … In Dominion, each player starts with an identical, very small deck of cards. In the center of the table is a selection of other cards the players can “buy” as they can afford them. Through their selection of cards to buy, and how they play their hands as they draw them, the players construct their deck on the fly, striving for the most efficient path to the precious victory points by game end.”
Why I bought it: Our gaming group back home has been fortunate enough to expand to at least five folks, but that also rules out some games. Dominion only supports four and Dominion Intrigue only supports four, but put them together and you can play with up to eight! At 33% off, you can’t really argue with those prices either.
Settlers of Catan: 5-6 player expansion 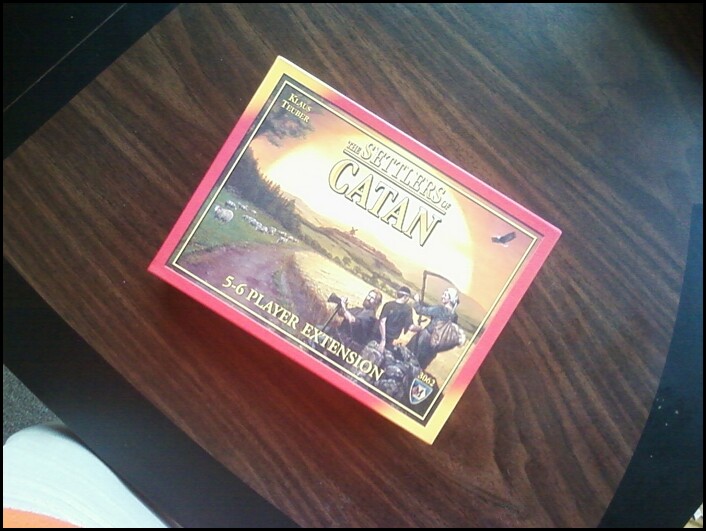 Designer’s description: The 5-6 Player Expansion for The Settlers of Catan allows you to add up to two more opponents without sacrificing ease of play. Designed for five or six players, it adds even more drama to the award-winning game of discovery, settlement, conflict, and commerce.
Why I bought it: After spending $48 on both Dominion games, we were totally set to call it a day on buying stuff… but then we got the 50% off coupon. Settlers might have reached a level of almost clichéd popularity, but that does nothing to change the fact that it’s just a great game. The only drawback being that the original version only supports four players, which doesn’t work for our group these days. With this expansion, problem solved!