Black Wine, Brick Mower, Adventure, Shut Up! and Misunderstood – Thursday, July 26 at Blind Bob’s in Dayton, OH
By David C. Obenour
You really need to get out and see a pop-punk show. It doesn’t much matter who and it doesn’t much matter where, but the when has to be now. It’d probably been about a year for me, maybe not even that, but damn – it was too long.
NJ’s been recently cranking a lot of good pop punk, so when I saw the local show poster for Black Wine – made up of ex-members of Hunchback and The Ergs – it was a no brainer. If those names don’t mean anything to you, but you’re reading this anyway than you owe it to yourself to go buy The Ergs back catalogue. If Larry Livermore was still signing bands, he would have signed The Ergs. I don’t know about Hunchback, but if Black Wine serves as any indication, I probably owe it to myself (and you to yourself) to buy their’s too.
The great thing about this particular Midwest midweek show was having five bands on the bill. As a slave to the 9-to-5 that’s normally something I cringe at but pop-punk sets are short and as long as the booker did his due diligence, you can count on a pretty solid night.
No exception to the rule here. Richmond, Indiana’s all-girl group, Misunderstood couldn’t have sounded more fresh from the garage – wearing their Joan Jett influences on their guitar straps – and that was a great thing. Hometown boys Shut Up! and Adventure represented Dayton awesomely, with their varying takes on power chord progressions (first time seeing both, but Shut Up seemed a little more chorus driven while Adventure toed the punk/hardcore line with their unmatched energy). 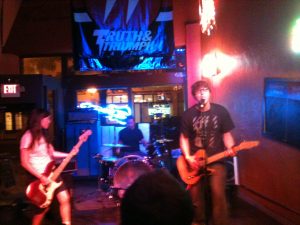 As for the first of the touring bands, I wasn’t familiar with Brick Mower but Don Giovanni Records has made a habit of signing great bands (Black Wine, Screaming Females, The Ergs, Full of Fancy, The Steinways) so as they’ll be releasing their next full-length in the fall, my hopes were up. The trio really delivered on those hopes too. Listening to their bandcamp page even a week after, the songs had stuck in my head – just waiting for something to trigger them back to the surface. 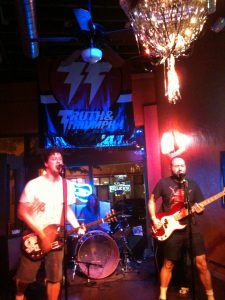 Having set up a feature on Black Wine back in issue  #24, they’ve aged really damn well, if you’ll excuse the pun. They’ve taken the parts and different pasts to create something all of their own. Touring on their new LP, Hollow Earth, the songs are trade off guy/girl vocals and can be a little indie, a little 80s, a little grunge, but the main tag here is pop perfection.So yeah, I did see an amazingly awesome pop-punk show but I doubt your experience would be much different if you take a chance from show posters or a colorful listing in your alt-weekly rag’s calendar section. Nobody was thinking about work tomorrow, nobody was worried about real life shit, hell – there was even a bride and groom at my show. Go have fun.