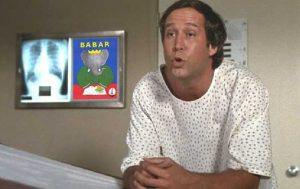 Chevy Chase may be on a new TV show with that guy who is well known for doing something else somewhere else on TV (though I only saw him once on that weird improv show Thank Goodness You’re Here [which was inherently flawed in it’s design, but an interesting concept]), but aside from often taking vacations or purchasing farms that may or may not be humorous or not being dead on a Saturday night (get it?), Chase’s name was once synonymous with another: Fletch. Or Irwin Fletcher, if you want a full name (Fletch F. Fletch to all inquiring parties who need not know a true identity).
Designed as a vehicle for Chase to do his thing in a starring role, the movie centers around an unintentionally shaggy dog drug dealing plot that sees Chase’s investigative reporter trying to solve for his newspaper column. Plot aside, Fletch is rife with a soundtrack full of “Axel F” ripoffs, strange pacing and a weird voiceover that haunts the screen for plot advancement and biting one-liners at unpredictable intervals. But just a few scenes of Chase’s deadpan delivery as he assumes different roles to work his way into undercover interviews will forever cement Fletch as one of the best comedies of its era.

He gets the girl, he solves the mystery, he drives a car very fast and he gives a rousing speech to a crowded VFW hall. But nothing can top his exchange with a doctor after giving his name as Arnold Babar.
Doctor: Isn’t there a children’s book about an elephant named Babar?
Fletch: I wouldn’t know. I don’t have any.
Doctor: Children?
Fletch: No, elephant books.
The humor is subtle, off-putting, and a bit surreal. Watching Fletch for the first time will leave the viewer possible confuddled. But on the second viewing, with a basis for the plot, the jokes become easier to spot and decipher, and Fletch becomes a way of life.
We might have The Big Lebowski, but our parents had Fletch. Do yourself a favor and throw this movie in your pile.