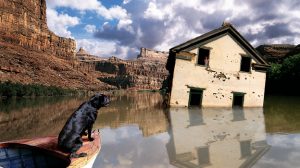 The inspirational photo collage thing or whatever.

What does it take to get two of the most sought after producers/musicians in indie rock to get into a studio and record a song together in two days?
National Public Radio and a photo of a black dog in a flood! If you’re enough of a nerd, you’ve heard this already as a segment of Project Song which is part of the All Songs Considered segment of All Things Considered. So many sub-segments!
In either case, the most important part about this is seeing who’s production direction steered the drums. As it turns out, both producers chickened out and went for more of a live sound on the drums instead of going for their individual signatures. But the Walla/Robbins guitar/bass dynamic is interesting.
You can check it all out here.