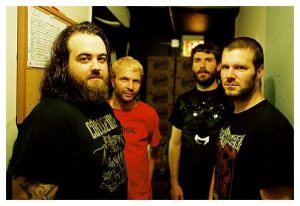 I’ve seen them blow out the walls of the old Bottom Lounge, I witnessed them tear down the crowd at The Note, and I saw them destroy a cellar basement in Indianapolis, but I’ve never heard them so loud and heavy as I did four days ago in my car, when I blasted my speakers so loud to Forever that they were ringing a bit when I got home.
Sweet Cobra, my friends, are good at tearing shit up.
What separates them from the rest of the gray area movement in metal is their allegiance to the simplicity and repetition of 80s hardcore. Their riffs are huge and overpowering, their drums are massive and skin-shattering, and they bash their way through their songs four chords at a time, way too metal to be hardcore, way too hardcore to be metal.
Their songs are about death and witchcraft and ravaged futuristic landscapes and God knows what else, and they are some of the most honest and straightforward musicians today.
With a new album coming out on Black Market Activities, the band is starting to break further into the consciousness of Metal America, and we all wish them fast, easy work to the top of the game, easily drowning out a Metallica show in a nearby megadome with sheer force from some small shitty rock club that they’ve turned into rubble.
But then there’s tragedy to address. As a long standing four piece, the band recently lost guitarist Mat Arluck to cancer. He’d been diagnosed and battling it for a while, but it’s still such a hard shock to lose someone so young with future ahead of him.
The band has decided to soldier on as a three-piece, and I think that says something. They’ve got a solid core, they want to respect their fallen brother’s wishes, and they’re set to turn all their competition into rubble. And I think that, more than anything else, deserves your attention when the band next comes to town.
Gray Area Score: Lead (Dark, and heavy as shit)