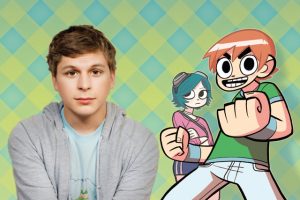 I almost didn’t write this column this week. No, I’ve a new distraction in my life. Or I HAD a new distraction in my life, but I finished all five volumes too quickly and now have ample time. Yes, I was prepared wholly and totally to abandon all my dear readers for simple entertainment, but it’s been a bit of an eye-opener.
I’m talking, of course, about Scott Pilgrim.
As soon as I heard there was a trailer for the new Edgar Wright-helmed, Michael Cera-starring film, I knew I had to catch up on the graphic novel before I saw it. It was too important to too many people that I know to let any live action preview sway me.
How important it would end up being to me, I wasn’t aware of.
You see, Scott Pilgrim, in all its five volumes of glory, has made me restart the novel I was working on. The way it blended comedy, super powers, broke the fourth, fifth, and sixth walls, and still maintained the fact that it was a lovey romance manga blew my mind a little bit. How could so much greatness be crammed into one goofy, cartoony series?
It’s the structure of the thing, you see. Scott Pilgrim carries on like some crappy boy-meets-girl book, and never once addresses directly the fact that he’s some sort of trained super fighter or that vegans have psychic powers.
We get the full rundown of the food that they’re making (with included recipe) just like a normal goofy hipster webcomic, we get meta references to other volumes in the series, like genre-defying autobiographical stuff, and we get good old-fashioned beatdowns, like in our favorite super hero (TRADEMARKED!) books. Wrap it up with an even dosing of ennui and pathos, mix it up with hilarious dialogue, and you’ve got an awesome piece of Candadian literature.
It’s a work so impressive in its scope and lightheartedness that it made me re-evaluate my own current writings. Why stick my head in the sand and keep going when I know I’ve been failing to capture the same amount of mirth and drama thirty-thousand words into a soulless diatribe?
So there you have it. Scott Pilgrim. Go read it. And then watch the movie.
BONUS LINGERING QUESTION: Can you make a movie of a series of graphic novels when the last few aren’t even out yet? Does that mean spoilers? Or a sequel? I’m sure this is addressed somewhere already, but I’m too lazy to have sought it out.
Gray Area Score: Any Color, as represented in Scott Pilgrim style grayscale.