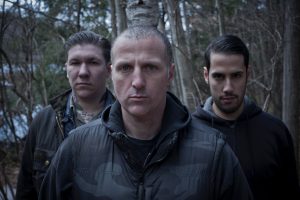 Brooklyn, New York’s TOMBS recorded a pair of covers for us.  Both are of “Heroes,” originally recorded by the “Thin White Duke,” David Bowie with Brian Eno in 1977.  The “NYC Mix” features both verses in English, while the “Berlin Mix” features a verse in German.
“Back when I was in high school, I saw this German film called ‘Christiane F’ which told the story of a young girl living in Berlin, and dealing with the brutality of heroin addiction,” Mike Hill, Tombs’ guitarist and vocalist, explained.  “Aside from being a riveting film, it had an amazing soundtrack by David Bowie.  I tracked down the LP and for about a week, it was on constant play.
“There is a version of his song ‘Heroes’ called ‘Heroes/Helden’ where the first half sung in English and the second half is in German,” Hill added.  “The song has this dark beauty that has always resonated with me. Over the years, I’ve been to Germany several times on tour. Whenever I’m in Berlin, this song comes to mind.”
Tombs recorded their versions of the song, which originated as a product of Bowie’s ‘Berlin’ period, with Tim Schmoyer at Capital One Practice Space in Boston, MA, on July 6.  German vocals provided by Ralph Schmidt (Hëllström, Planks) were recorded by Andreas Rosczyk at Ira Space in Germany.  Both versions were mixed by Mike Hill at The Fortress of Solitude.
NYC Mix

They can also be found here:
http://soundcloud.com/everything-went-black/tombs-heroes-nyc-final-mix/s-rxHxD
http://soundcloud.com/everything-went-black/tombs-heroes-berlin-final-mix/s-PIaxJ
Tombs, a critically acclaimed metal trio, released their latest full-length, Path of Totality, to critical accolades in 2011, including the album of the year in Decibel Magazine and Brooklyn Vegan. It also came in at number 2 on Pitchfork and number 3 on NPR’s top list.  Tombs, who are well known for their ability to tap into the infinite well of emotion and expression continue to do so with “Heroes,” a recording that showcases one of the finest heavy bands in the world.
For more information about Tombs, visit them at the following websites:
http://www.tombscult.com
http://www.tombsbklyn.bandcamp.com
http://www.facebook.com/TombsBklyn
http://twitter.com/Tombs666