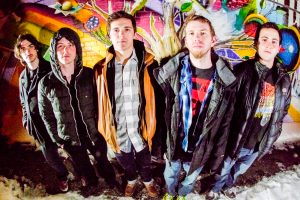 Washington, D.C.’s Wings Denied present an organic approach to progressive metal. They seamlessly blend soaring vocals the musical technicality. This sound is exemplified on the group’s debut full-length, Mirrors For A Prince, which was recorded by Jamie King (Between The Buried and Me, Scale The Summit).
Forming in 2012, Wings Denied has released two EPs (2012’s Awake and 2013’s The Split). With a solidified lineup, the group quickly became a stronger and more fluid unit from constant touring and sharing stages with the likes of All That Remains, Darkest Hour, TesseracT, Diecast, and many others. Such a new found cohesiveness prepared Wings Denied for the chance to work with King.
Ghettoblaster recently caught up with guitarist Zach Dresher to discuss the record. This is what he told us.
When did you begin writing material for Mirrors For A Prince?
I first started coming up with ideas in August and September of 2011, and the first songs which were completed for the album (“Maiden” and “Clockwork”) were written during the end of that year. The album’s writing was finished in March of 2013, with “Generation Y” being the last song written. However, when we recorded in August of that year, some parts, namely in the vocals, were re-written.
What was the most difficult song to take from the initial writing stage through recording and mixing? Why was it so troublesome?
Probably “Six Years and a Day” simply because it’s our longest song, with something like 22 different riffs or sections, and easily the most complexity on all the instruments and most strenuous vocally. Additionally, we had two guest solos, recorded by two musicians in two different States from us, so that was a bit difficult to maneuver. Overall though, that’s the song we’re proudest of on the album, so I guess the trouble was so worth it.
Which of the songs on the record is most different from your original concept for the song?
“In Search of Sunrise” ended up having vocals in a lot of places I didn’t anticipate, and not having vocals in places that I did. The drums also changed a lot; it was originally intended to be slower, with a less driving rhythm, but then after jamming it out a bunch, we decided it was more fun to play with more energy.
Did you have any guest musicians play or sing on the record?
A bunch! As much as we love writing our own music, I love having the ability to let others with styles we wouldn’t normally use collaborate on our music. The guests included: Michael Rumple of Lorelei- Vocals on “Maiden” Joe Lester of Intronaut- Bass Guitar on “Neant” Dave Cohen of Equilibrium Guitars and Slumberjack- Guitar Solo on “Six Years and a Day” Nick Llerandi of Ever Forthright- Guitar Solo on “Six Years and a Day”
Who engineered, produced, and mastered the record? What input did they have that changed the face of the record?
Jamie King handled 100 percent of the production for Mirrors For A Prince. We came to him with just about everything written, so most of his contributions had to do with the specific tones of the instruments used on the album, as well as some vocal phrasing. He also had some cool ideas for add-ons in the album, such as doing some vocal parts through a megaphone, and adding in a few interesting guitar effects.
Is there an overarching concept behind your new LP that ties the record together?
Although the album isn’t lyrically or musically conceptual, the title of the album ties all of the songs together. Mirrors for a Prince is titled directly after the works knows as mirrors for princes- books written for authority figures on how to govern and rule. Luka felt like the songs had messages that encompass a range of emotions and topics. It is what we govern ourselves by; therefore the messages on the album are our version of mirrors for princes.
Have you begun playing these songs live, and which songs have elicited the strongest reaction from your fans?
We actually toured for a month on these songs before even recording them, because we felt that practicing them in front of a live audience helped to turn them into songs that got the best crowd reaction, and were the most fun to play. Before the album was out, we used to consistently get the best response to “Generation Y” and “Maiden,” but now we tend to get requests for “Six Years and a Day” and “Neant” the most.
(Watch the lyric video for “The Machinist” here: http://www.kerrang.com/19580/wings-denied-premiere-machinist-lyric-video/.)