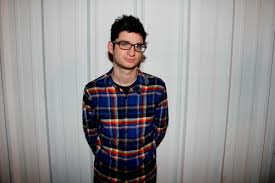 Farpoint, the solo project of Man Overboard’s Zac Eisenstein has released the debut EP, Think About The Future on iTunes and physically via Lost Tape Collective.  Physical copies will also be available on the upcoming Man Overboard tour with All Time Low and their headlining tour with Transit, Forever Came Calling and Knuckle Puck.The seven-song release was produced by Tyler Long and Zac Eisenstein in the late summer of 2013 in Springfield, MO and a full stream is available via Soundcloud.
Ghettoblaster recently spoke with Eisenstein about the record.  This is what he told us.
When did you begin writing the material for your EP?
Some of these songs I came up with the original concept up to three years ago.
What was the most difficult song to take from the initial writing stage through recording and mixing? Why was it so troublesome?
Probably “Anywhere But Here” cause that file got like corrupted at one point! Ha.
Which of the songs on the record is most different from your original concept for the song?
“Are We Gonna Make It” was supposed to be a rap song with one verse of singing so probably that one.
Did you have any guest musicians play or sing on the record?
Tyler Long plays a lot of guitar. The female vocals on “Are We Gonna Make It” are done by my pal Viv Fabry.
Who produced the record? What input did that person have that changed the face of the record?
The record was produced by Tyler Long. We met through our management and we got along great. Tyler really understood what it was that I was trying to do.
Is there an overarching concept behind your new album that ties the record together?
No. None whatsoever. Farpoint is like my freestlyle session. Any and every weird or fun idea I have should be able to be executed through Farpoint.
Have you begun playing these songs live and which songs have elicited the strongest reaction from your fans?
I have not yet, but I can’t wait to play “Stay Alone Kid” and “Satellite” for a crowd!