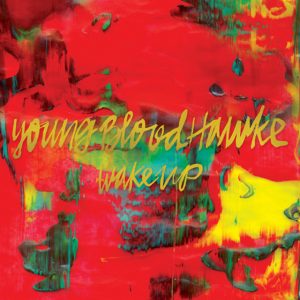 Los Angeles indie alternative quintet Youngblood Hawke will release their debut for Republic Records on April 30 (and April 23 via iTunes).  Hot off sold-out headlining shows in their hometown, and ten appearances at SXSW in 2013, the band is currently in the midst of a headlining run across the U.S.  Wake Up, their forthcoming LP showcases a group with real teeth, chomping for a chance at the pop jugular. Cut from the same cloth as fun. and Imagine Dragons, this is a group poised for success and greatness (or whichever comes first).
Ghettoblaster caught up with the band to discuss their latest album.  This is what they had to say about it…

When did you begin writing the material for your most recent album?
We started writing material for our album Wake Up during the summer of 2011.  We wrote and recorded all the songs in Simon’s second bedroom studio.  It’s a tiny, homemade studio with a comfortable, creative vibe.

What was the most difficult song to take from the initial writing stage through recording and mixing?  Why was it so troublesome?
I don’t remember any song being particularly difficult.  Our take on songwriting is that if a songs taking too long to come together we put it aside and move on, maybe revisit it later.  The songs that we’re most proud of our the songs that come together quickly, songs that feel natural and represent our feelings at the time.
Which of the songs on the record is most different from your original concept for the song?
We usually have a theme or idea about the concept for the song before we start writing it.  Our song “Black Beak” started out very experimental, exploring different themes, then all of a sudden a common them of “addiction” started to emerge.  We decided to expand on that.

Did you have any guest musicians play or sing on the record?
Yes!  We had our close friend Dave Bantz sing some backup vocals on a few of our songs!  His voice is insane, he can hit really high notes.  It really added a nice texture to the vocals.  Also, we had Justin Meldal-Johnsen play some bass on a few tracks!  He rips!

Who produced the record?  What input did that person have that changed the face of the record?
Simon Katz, our guitarist, self produced the whole record, except for a few tracks that we worked on with the talented Matt Squire.  It was incredible working with Matt, he felt like another band member and really helped us hone in on our ideas to create some magical songs.
Is there an overarching concept behind your new album that ties the record together?
Hope is a theme that ties the record together.  When we were writing these songs we were going through a lot in our personal lives.  Writing these songs was a cathartic experience that helped us get through them.  We wrote these songs to make us feel better.

Have you begun playing these songs live and which songs have elicited the strongest reaction from your fans?
“We Come Running” has elicited the strongest reaction from our fans.  I think people can really relate to the message of the song, which is about not giving up when things get too tough, not letting obstacles in life slow you down.
(Catch Youngblood Hawke on tour here: