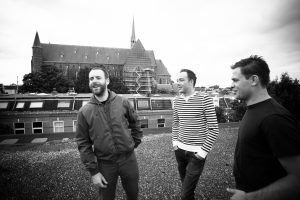 A-F records recently announce that they’ll be teaming up with the Dutch punk outfit Antillectual to release their new full length LP, Perspectives and Objectives, this August in North America.  Antillectual’s passionate music is melodic and energetic.  With a sound firmly rooted in the combustible, dynamic punk of the ‘90’s skate scene while incorporating hints of modern emo, orgcore and even metal, the band’s sound is very distinctive.  What defines that sound is a sense of urgency that resonates in each and every song.
Ghettoblaster caught up with guitarist/vocalist Willem to discuss the forthcoming LP.  This is what he told us…
When did you begin writing the material for your most recent LP?
I think sometime early 2011. I know some bands have a certain moment they start writing their new album or take a period off to write an album. We never really stop writing. Our songs come to existence rather slowly, but steadily. After finishing an album we keep on writing new stuff for a next album. In fact, I am already working on some new songs for a future release.
What was the most difficult song to take from the initial writing stage through recording and mixing? Why was it so troublesome?
For me personally, I have to say “To All Members of Parliament”. That was the last song we were working on before recording. When we started tracking drums the vocals weren’t really ready yet for instance. And before entering the studio I prefer to have the songs 100 percent ready and if possible played in a live setting. “Work Horses vs Show Ponies” was a song that took quite some time to record since it has a different feel than we are used to. I wrote the main riff and chord progression a long time ago and waited finalizing it into a song until I felt we wanted to try this for an experiment.
Which of the songs on the record is most different from your original concept for the song?
The way we write songs is as follows: I come up with a demo recording of computer drums, guitars and bass. We play the song into shape at rehearsals and in the meantime I will be working on lyrics. The biggest metamorphosis takes place before I take the songs to the other guys. And I think our song “Books” has changed the most over time, before recording. The song has a lengthy bridge, including a post-chorus, a fade out and a fade in. It took some time before all parts, notes and beats were on the right place.
Did you have any guest musicians play or sing on the record?
Definitely, on “To All Members of Parliament” we have three former bass players (yes, we have had a fair share of those) doing guest vocals. Since they all picked up playing music again it seemed fun to have them contribute. There are two songs that have cello and violin parts, done by our friend Sylvia and on three other songs there are piano and organ parts by our friend Stijn. And on “Soundtrack” there is group of female friends helping out with “Yeahs!” and “No’s!”.
Who produced the record? What input did that person have that changed the face of the record?
Nico van Montfort recorded most of the record, mixed and mastered it. We recorded the bass and guitar parts ourselves. We have worked with Nico for years and he has done our live sound as well. So he feels like a fourth band member at this point. Nico is known for his loud yet slick recordings. He will make it sound raw and badass without losing control or becoming inaccessible. He knows how to make the crappiest band sound awesome. That’s why we go to him!
Is there an overarching concept behind your new album that ties the record together?
There was no intention to write a concept album. But since we are a socially conscious band, and we are always inspired by current events you could say that there is a red line through it, even though it’s not very explicit. But I think that connection between all songs is that they point out that we are in this together, in the broadest sense possible. Whether you look at the current state of the world, the uproars in Turkey and Brazil, or the way women, gays and refugees are being treated nowadays, in the current globalized world it is impossible to say, “You are on your own, they are on their own”. Everybody knows what is going on. That makes you responsible, you can’t hide behind ignorance.
Have you begun playing these songs live and which songs have elicited the strongest reaction from your fans?
Yes, we have, we prefer to play them into shape live before recording. “Soundtrack” got some good responses, and contrary to our expectations so did “Work Horses vs Show Ponies”, which we were curious for how people would react on it. “With Gaga on Our Side” was well received as well. But the best feedback is getting a live response after people listened to the album more thoroughly at home or wherever.
(Antillectual has premiered a new video for their new song “Soundtrack” via punk news.  You can check that out here: http://www.punknews.org/article/52029/videos-antillectual-soundtrack-exclusive.)