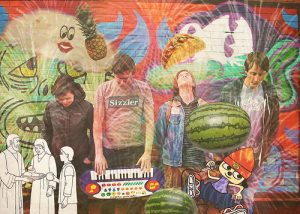 When Hang Time first got together in early 2012 and started writing songs, they didn’t want to be restricted by any specific genre or sound. Instead, they wanted to create their own sound that paid homage to the decades of music that have influenced them. From their parents’ Kinks and Beatles records, to the ‘80s and ‘90s cassettes of their youth, Hang Time incorporates highlights from the past few decades in their songwriting.
Their focus has paid off in spades; the band has played local shows throughout the year in their hometown of Salt Lake City, Utah opening for acts such as Icky Blossoms, Tilly & The Wall, The Octopus Project and Washed Out.

On March 5, Hang Time release their self-titled album via Kilby Records.  Ghettoblaster caught up with Hang Time’s Will Sartain to ask him about the release and this is what he said…
When did you begin writing the material for your most recent album?
Our last band, The Future of The Ghost, disbanded in late 2011.  We still wanted to play music together, but we wanted to move on from the mid ‘90s indie rock sound from FOTG.  The band had a lineup change in early 2012 and quickly put together a batch of songs with a new, fun sound.  We wanted to have fun with the band.  It felt natural to want the songs to move into a more purely positive, fun direction.  The album was ready to record after six months.  The danceable sound was a new direction for us.
What was the most difficult song to take from the initial writing stage through recording and mixing?  Why was it so troublesome?
“Bubble Bath.”  I wrote the song on the acoustic guitar and ended up using a Casiotone-701 playing the same parts but with a “chord” sound instead of individual notes.  Playing it live in practice it seemed like it was missing something.  It was almost left off the album.
After we laid down the initial layers during the recording session we ended up fuzzing out the bass a lot more than the other bass tracks on the album.  It really brought the song together.  We also used one of the engineer Mike Sasich’s awesome keyboards that was laying around, an ARP LE-IV String Ensemble.  As far as I know AIR uses this keyboard occasionally.  To top it off, we caught the very end of my vocal in the verse and ran it through a delay unit to create a spaceship type sound.  It became one of our favorite songs on the album.
Which of the songs on the record is most different from your original concept for the song?
“Awesome / Rad.”  I had a lot of reservations putting “Awesome / Rad” as the first song on the album.  On one hand it’s probably the catchiest song on the album (I think), on the other it’s a bit of a departure from the rest of the album.  Although it’s flooded with synths like the rest of the album, it is the only song with guitar driving the song with a true rhythm guitar part.  I wanted to make a dance album, and it’s dancey enough but it’s a lot different from songs like “Turquoise” and “Cop Show” that really rely on counter balanced hooks between guitar and keyboard to keep the song together.
Did you have any guest musicians play or sing on the record?
Mike Sasich played keyboard on a song or two.  He also engineered, mixed, and mastered the album.  Mike was such a huge asset to the album.  He has so many random keyboards and it allowed us to experiment with different sounds which gave way to new ideas on how to put the songs together.
Who produced the record?  What input did that person have that changed the face of the record?
Mike did a lot of production work after we laid things down that helped shape the album.  As I said before, fuzzing out the bass in “Bubble Bath” was key.  He was also open to experimenting with effects during the mixing process.  He was so easy going.  In past recording experiences with different engineers I have felt rushed, or felt like there was a clash in the vision for the album…There was none of that.  We felt totally comfortable making the record we wanted to make and Mike definitely became a part of the album with his own input.
Is there an overarching concept behind your new album that ties the record together?
Fun.  We just want to have fun!  We wanted to make songs that felt good to play.  I was tired of making serious songs.  We also wanted to do something kind of odd and unique.  I feel like we achieved that with our s/t release.
Have you begun playing these songs live and which songs have elicited the strongest reaction from your fans?
Hang Time has played a handful of local shows in our hometown of Salt Lake City.  It seems like “Bubble Bath” and “Big Kids” are the favorites but I can’t say for sure.  We’ve had about 1,000 free downloads of the new album in the first few weeks of hosting it, which we consider a success in itself just getting the music out there!  I am happy people are listening to it.  I think once we start touring in the fall we will have a better idea of which songs stick.
(Catch Hang Time live at one of the following dates: