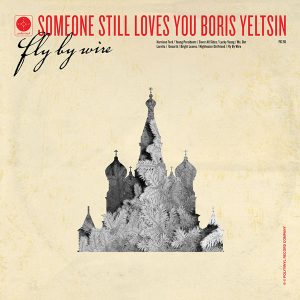 Phil Dickey, Will Knauer and Jonathan James had a lot of time to reflect during their 10-hour flight home from Yekaterinburg, Russia.  Collectively known as Someone Still Loves You Boris Yeltsin, the three musicians had just spent a whirlwind six days in their namesake’s home country: meeting with Yelstin’s close friends and personal translator (who gifted them seven bottles of expensive Russian vodka) and performing at an elementary school after the U.S. consulate named them cultural ambassadors for a day.
The trip, which came about when the Boris Yeltsin Foundation extended an invitation to the band after tracking them online for years, concluded with a set at Old Nu Rock (making SSLYBY the first American group to play at Russia’s largest winter rock festival).  Armed with the knowledge that songs and words have power, SSLYBY began to make a record before these feelings left them.
Ghettoblaster caught up with Will Knauer recently to discuss their most recent, and perhaps most beautiful, endeavor, Fly By Wire.  This is what he said about it.
When did you begin writing the material for your most recent album?
Over the past few years some of these riffs began creeping into our guitars.  But it wasn’t until last year that they even began to start turning into songs.  I would have to say that the majority of the songs were written at the beginning of this year, and also a great deal while we were recording them.  I think without the pressure of a deadline they would mostly still be floating around in wherever it is that songs are before we pull them into the world.
What was the most difficult song to take from the initial writing stage through recording and mixing?  Why was it so troublesome?
At least half of the songs felt like this to me.  Sometimes one song would have multiple demos and each would have a different feel to it, so part of the problem was deciding on which version would work the best not only as a standalone song but also in context of the entire album.  The song “Fly By Wire” had trouble getting off the ground because we began taking it in the wrong direction.  We knew there were elements of it that would work very strongly but we couldn’t see the larger picture for it.  There was a great moment where we randomly stumbled on an old recording on a cassette tape that had been recorded on a four-track from a few years ago.  Just a short demo for a weird idea.  It turned out to be the missing piece and evolved into the chorus of the song.
Which of the songs on the record is most different from your original concept for the song?
“Harrison Ford” is nothing like the original demo.  That song was originally recorded as a demo for our previous album Let It Sway.  Everyone was working on so many songs at that point that a lot were put on the back burner.  We realized that there was a really pretty guitar riff in the original version and rebuilt the entire song around it.
Did you have any guest musicians play or sing on the record?
Nope.
Who produced the record?  What input did that person have that changed the face of the record?
We produced it ourselves.  Being confined in a small attic for three months changed our faces.
Is there an overarching concept behind your new album that ties the record together?
A desperate attempt to finish all the songs in time.
Have you begun playing these songs live and which songs have elicited the strongest reaction from your fans?
Yeah we have recently begun playing almost all of the new songs.  “Harrison Ford” seems to captivate the audience.  But “Fly By Wire”, “Lucky Young”, “Young Presidents”, “Ms. Dot”, “Loretta”, “Unearth”, “Cover All Sides”, “Bright Leaves” and “Nightwater” always go over really well too.
(Catch Someone Still Loves You Boris Yeltsin on their upcoming tour: