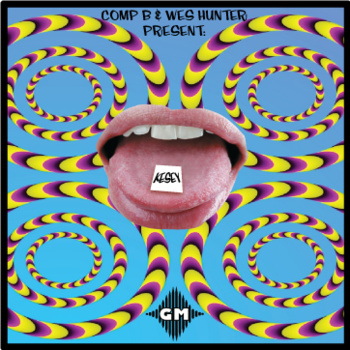 Wes Hunter (emcee) and Comp-B (producer), two members of Athens hip-hop collective Grey Market, released their album Kesey on March 5. Named after the author of One Flew Over the Cuckoo’s Nest, Kesey represents a musical homage to the psychedelic age. Although this theme ties the record together, Kesey is also a sharply honed set of rock-solid bangers, each one of which can be enjoyed individually. Comp-B’s production wizardry–coupled with both Wes’ and Comp’s ears for samples–gives the record a varied yet cohesive sound. T
he album’s beats blend the traditional soul sound with wailing electric guitar, giving already powerful tracks like “All Madden” and “Keef Richards” a new bite. From the bouncy feel-good of “Got It Made” to the expressive piano arpeggios on “My Mind,” Kesey’s beats reveal a wide range of sonic influences.
Ghettoblaster recently caught up with Wes Hunter to discuss the record.  This is what he said about it…
When did you begin writing the material for your most recent album?
December. I wrote half the album early December. Then I went to Cincinnati for a few weeks to regroup my thoughts and came back to Athens and wrote the other half.
What was the most difficult song to take from the initial writing stage through recording and mixing? Why was it so troublesome?
Probably “Got it Made.” Soham was in California and I ended up throwing Freeman on at the very end due to some issues with timing.
Which of the songs on the record is most different from your original concept for the song?
Well I think this whole record was my style. Somewhat different from Grey Market, but it was just me at a specific moment in my life. A lot of frustration and self-observance is expressed in this album.
Did you have any guest musicians play or sing on the record?
I had three guests on the album. Dialogue on the intro track ‘cuz that’s my homie. Schwartz came through and laid it down on “My Mind” and Freeman & Soham on “Got it Made.” Also Freeman laid down the chorus on “The Fix” and the background vocals on “I’ll Be Home.”
Who produced the record? What input did that person have that changed the face of the record?
Myself and Comp-B produced the record. We both found samples and he made the beats and mixed it and I wrote all the lyrics and came up with the concepts. I think we pushed each other to reach beyond our comfort zone and that’s what made the record what it is.
Is there an overarching concept behind your new album that ties the record together?
The concept is basically supposed to be a live concert feel in a sense. Also, it’s based on Ken Kesey so acid plays a big role. I was doing my thing when I wrote this album and was reading a lot of literature. This is the definition of self-awareness.
Have you begun playing these songs live and which songs have elicited the strongest reaction from your fans?
I was playing a few of the tracks live before the album even dropped. The top three tracks would be; “My Mind,” “I’ll Be Home,” and “Jamaican Sand.”
(Check the album out here: http://thegreymarket.bandcamp.com/album/kesey.)