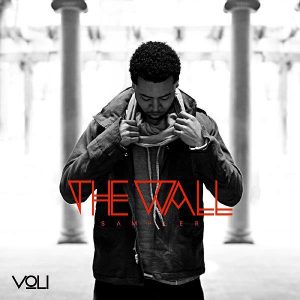 New Jersey native Voli got his musical start as a rapper, honing his lyricism while internalizing the tastes of his favorite producers of the era. He eventually shelved that talent in order to cultivate his hip-hop production skills, developing a style that incorporated pop, and rock with his hip hop chops.  It was then that he realized that there was no one better to feature on his tracks than himself.  With his latest album, The Wall, Voli shows his true colors, setting his artistic journey as a producer, songwriter and lyricist to tape.
Ghettoblaster recently caught up with Voli to discuss The Wall.  This is what he told us…
When did you begin writing the material for your most recent album?
Even though I’ve released a couple projects in the past 2 years, I began writing for my album I’m currently working on (The Wall) since around summer 2010.
What was the most difficult song to take from the initial writing stage through recording and mixing?
I mix all my material, so I’d have to say “Guns N Roses” because the song has so many layers instrumentally, plus Bebe Rexha had to come to my house and recut her vocals which made the process longer.
Which of the songs on the record is most different from your original concept for the song?
Well, “All The Same” conceptually remained the same, but I initially wanted to rap the verses. I tried some flows but it just wasn’t gaining momentum, so I ended up singing.
Did you have any guest musicians play or sing on the record?
Gavidia plays guitar on all of my songs.  Voli isn’t a band, but if I were, he’d be the Slash/Brian May.
Who produced the record?
I’m my own producer.
Is there an overarching concept behind your new album that ties the record together?
Isolation, obsession towards a goal, the life experiences of our generation.
Have you begun playing these songs live and which songs have elicited the strongest reaction from your fans?
Not yet, but I have shows coming up! November 14th, I’m performing at Spike Hill in Brooklyn NY. December 8th, 92YTribeca in NY. More info on upcoming events at www.VoliMusic.com.