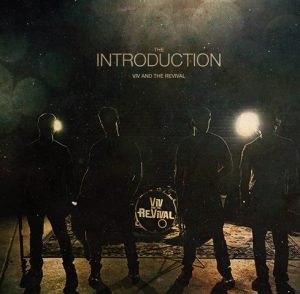 Over the past three years, Philly’s Viv and the Revival have self-released four EPs, and their songs were promptly picked up for television shows, commercials and movies.  Poised and ready to release a full-length album’s worth of material on the world, Viv and the Revial are set to release The Introduction, an album full of hyper-melodic tunes that appeal to modern rock and pop fans alike this winter.
Ghettoblaster recently caught up with brainchild Viv Peyrat to discuss the album.  This is what he said about it.
When did you begin writing the material for your most recent album?
I started writing songs for this album without knowing it about three years ago. I was always writing for EPs and five-songs types of projects, so it was nice to compile everything and make a record!
What was the most difficult song to take from the initial writing stage through recording and mixing?  Why was it so troublesome?
One of the more difficult ones was “Welcome to a Good Time”. There were a few different people involved who wanted to hear it a certain way and the production kept changing. Sometimes it’s tough to reimagine a song you’ve heard for a year and turn it on its head. Ultimately I’m really happy with the final recording for that song!
Which of the songs on the record is most different from your original concept for the song?
“Criminals” is the one that changed the most, production-wise. There is a new hook on it, and a different groove altogether. I had originally titled the song “Family” about three years ago, and I put it aside and never recorded it until now.
Did you have any guest musicians play or sing on the record?
Yes, we had some great people play on this record. Joe Baldacci is playing drums and bass on a few songs. Nate Rylan is playing a few instruments on a couple tracks. Rick Friedrich also played a lot of stuff on some of the tunes.
Who produced the record?  What input did that person have that changed the face of the record?
The record was produced by me, Rick Friedrich and Scott Bricklin. We all adapted our styles and ideas to these songs. You can hear all of the different influences going on throughout this record, and every song sounds unique.
Is there an overarching concept behind your new album that ties the record together?
The message is definitely a positive one: to live your life and truly do what you want to do, and be who you want to be. There is a good vibe to this record, and every song has its own world and place.
Have you begun playing these songs live and which songs have elicited the strongest reaction from your fans?
We’ve been getting a great response from fans to these songs. “Forever”, “Welcome to a Good Time”, and “I Want It” always get a killer reaction. We always try to put on a great show and make sure people leave feeling like they had the time of their lives!
(You can check out Viv’s video to his single “Criminals” here: http://www.youtube.com/watch?v=X28B45H6TkQ
For more information, please visit:
WEBSITE: www.vivandtherevival.com
FACEBOOK: http://www.facebook.com/vivandtherevival
TWITTER: http://www.twitter.com/vivtherevival  @vivtherevival
YOUTUBE: www.youtube.com/vivandtherevival)

Tags: Viv and the Revival