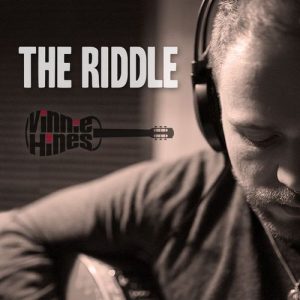 Soul infused, R&B influenced, singer-songwriter Vinnie Hines, who has garnered deserved comparisons to Jason Mraz, Maroon 5, and Bruno Mars, is gearing up for a midwest tour this summer, riding the success of his newly released single, “The Riddle.” You can check out a stream of the track here along with a video teaser here.
Ghettoblaster caught up with Hines to talk about the single and this is what he told us.
When did you write “The Riddle” and what made you decide to release it as a single?
I wrote the song a couple years ago when the Mars Rover was about to land, after my roommate dared me to write a song about one of our favorite things. When I performed it live and immediately saw people bobbing their heads to a song they’d never heard made me believe it was “single-worthy.”
What was the most challenging part of the recording and mixing?
The recording process went very smoothly, but the vocal lines are pretty tricky. I hate to “punch in” on a recording, so we ended up recording the entire song’s vocals from start to finish almost ten times. The mixing was simple considering the minimalist vibe I wanted the song to have, using only snaps and an actual salt shaker for the percussion. Nick of The Nook Recording Studios was incredibly good and was patient but driven, as well, streamlining the process, making it fun.
Does it differ at all from your original concept for the song?
For the first time in a long time, my vision for the song completely coincides with the finished project. It’s exactly what I heard in my head since I wrote it.
Did you have any guest musicians play or sing on the song?
Our photographer/videographer at the studio happened to play bass, as well, so he was gracious enough to lay the lines down. Also, some of my closest friends helped add the “snaps” in the studio. Otherwise, I played guitar, shook the salt, and did all the singing.
What are the lyrical themes or messages present in the song?
The entire song is an actual riddle. I wanted to write something vague enough to be interpreted as anything, but specific enough to be recognizable once the veil was lifted. The few people that know what “The Riddle” is about were stunned that they didn’t initially see the real meaning behind the song!
Have you performed this song live? If so, what reaction did it get from your fans?
I perform this song live almost every show, and every time, I see people groovin’ along. The fast pace and fun vocal hooks definitely keep people wanting more, and I can only hope that you find yourself humming along long after the song is over.
(Visit Hines here: https://www.facebook.com/vinniehinesmusic
https://itunes.apple.com/us/album/the-riddle-single/id794542887)