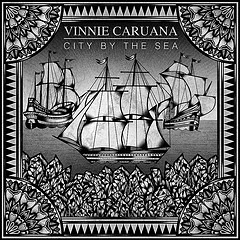 City By The Sea

Vinnie Caruana, frontman of punk icons I Am The Avalanche and seminal post-hardcore band The Movielife, recently announced details about his upcoming debut solo release, City By The Sea, out February 5 on I Surrender/Run For Cover Records. Caruana will be touring the U.S. in support of City By The Sea (produced by Steve Choi from RX Bandits) throughout February on the Acoustic Basement Tour, along with Geoff Rickley (Thursday), A Loss For Words, Koji and Brian Marquis.
Ghettoblaster caught up with Caruana as he prepared for the tour to discuss his debut.  This is what he said about it…
When did you begin writing the material for your debut?
I’ve had a few of these songs for years, but most of them were written within the last 12 months.
What was the most difficult song to take from the initial writing stage through recording and mixing?  Why was it so troublesome?
I had a little issue settling on the dynamics for “ Somehow the World Keeps Turning” but working with Steve Choi in the studio helped answer a lot of questions. He has a lot of input and guidance for me.
Which of the songs on the record is most different from your original concept for the song?
Probably “City by the Sea”. The whole “We Will Rock You” beat in the chorus makes it very anthemic. I was originally singing it at an octave lower and was more whispery. Now I’m belting in that song.
Did you have any guest musicians play or sing on the record?
Steve Choi from Rx Bandits and Peace’d out played pianos, percussion, and some extra guitars. All of the strings and flutes coming in and out are his arrangements.
Is there an overarching concept behind your new album that ties the record together?
Not so much a concept as much as a sound. Steve gave me different avenues to go down as far as production goes. The overall sound reflects Choi and I just vibing hard on everything.
Have you begun playing these songs live and which songs have elicited the strongest reaction from your fans?
The fans have been incredible. I have a feeling I’m not going to have to sing much on these next tours.
(Stream new song “Somehow The World Keeps Turning” here!)

Tags: I Am The Avalanche, The Movielife, Vinnie Caruana