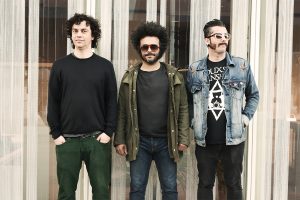 Gigging since 2011, hotly tipped psych trio Jupiter Lion keep their ears to the pulsing beat of seventies acts like Tangerine Dream and Can and an eye on a shiny, psychedelic future. In the eighties, Valencia was to Spain what Ibiza was to the rest of Europe—a city full of all-night party people, and the music and drugs that kept them awake, which is for an odd setting for a new take on such a smooth “motorik beat.” Jupiter Lion wasn’t inspired by the sound of Krautrock so much as its experimental approach, much like bands such as Holy Fuck and Zombie Zombie, but what they share with bands like Neu! is an avoidance of both Anglo-American mainstream, as well as the pop on the Spanish airwaves.
Acclaimed for their “hypnotic”, “cosmic”, “explosive” and “slow-burning” live shows, Jupiter Lion have been named among the best bands of 2012 by Playground Magazine and favourite new band on the forums of Primavera Sound.
Jupiter Lion release their debut album, Silver Mouth, via seminal underground label, BCore on August 5. This special edition release will include remixes of their single, “Black Mouth” by their drummer, DJ Gonzo in Vegas, another by The Welfare State plus a remix of ‘Silver Constellation’ by the renowned Valencia production duo Phat & Zkinny.
Ghettoblaster caught up with JL’s Vincente Sais to discuss the debut.  This is what he said…
When did you begin writing the material for your most recent album?
We started in the beginning of 2010 but it wasn’t untill the end of 2011 that we had all the tracks. Some of them were made at home and some of them where made after many hours experimenting at the studio.

What was the most difficult song to take from the initial writing stage through recording and mixing? Why was it so troublesome?
There wasn’t a particularly difficult song actually. From the very beginning, the tracks were conceived to be played live, without any additional “tricks”. For us there was no sense in recording additional arrangements that wouldn’t be possible to play live.

Which of the songs on the record is most different from your original concept for the song?
Probably “Black Mouth”. It was supposed to be something more ethereal, like the first chords in the beginning, but it ended up being something pretty different.

Did you have any guest musicians play or sing on the record?
No, we didn’t. The voices you can hear on the record are ourselves through a vocoder.

Who produced the record?  What input did that person have that changed the face of the record?
The album was recorded by Pablo Peiró a.k.a Pei, bass player of Betunizer (another band on Bcore) and owner of Sountess Studio here in Valencia. Soundtess is a small studio with very good acoustics and Pei is well known in the Valencia underground scene for his speed and quality. We recorded it live, in one day, no overdubs, and then we mix it together (Pei and us) in no more than one week. Things came together so naturally.It was mastered at Ultramarinos Costa Brava located in Catalonia –the studios where many of the Spanish indie scene bands record their albums.
Besides that, there’s no additional production, not even a single reverb.
Is there an overarching concept behind your new album that ties the record together?
In fact there are three: sci-fi, horror movies and space.
Have you begun playing these songs live and which songs have elicited the strongest reaction from your fans?
Yes we began playing the songs live last year across Spain including Primavera Club & Primavera Sound.  “Black Mouth”, “Silver Constellation”, “Krokodil & Bellicec” are the ones that we feel are most celebrated when we play live.
(Here is a link to Jupiter Lion’s new single, “Black Mouth”: https://soundcloud.com/jupiter-lion/black-mouth-1?in=jupiter-lion/sets/jupiter-lion-silver-mouth.)