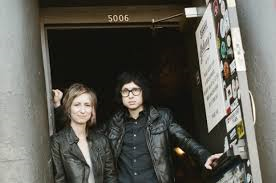 LA/Detroit garage-pop duo, The Singles are set to release their album, Look How Fast A Heart Can Break on April 1.  They recently revealed the first single from their upcoming album with the premiere of ”Inamorata” via USA Today . The informed garage-pop hits full-force with “Inamorata,” solidifying the duo of guitarist/vocalist Vince Frederick and former Gore Gore Girls drummer, Nicky Veltman’s commitment to their Detroit roots of stripped down rock ‘n’ roll.
Ghettoblaster recently caught up with Frederick and Veltman to discuss the record.  This is what they said about it.
When did you begin writing the material for Look How Fast A Heart Can Break?
Vince: The material for the album spans quite a few years, the earliest being “Our Last Goodbye” written back in 2004. I started recording demos for the bulk of the songs in 2008/2009, but they didn’t come into their current incarnation until last year when we started performing the songs live. I typically record demos when I get an idea for a song on guitar or keyboard and then later on cull through them to determine which songs I think are strong enough to show the band.
What was the most difficult song to take from the initial writing stage through recording and mixing? Why was it so troublesome?
Vince: “Don’t Wanna Ever Fall In Love Again” was the song that could have been a disaster. I thought the demo I made had a quirky charm that wasn’t necessarily keeping in tone with the rest of the album but was still fun and interesting. However, Rick Parker, who helped produce and mix the record, thought that we could do better in the studio. I was so attached to the original material that we didn’t even rehearse it until we started recording it on the fly. However, as soon as we got to the mixing stage the track started to evolve into something we felt could close the album with. It had a fuller richer sound with the addition of Nicky’s danceable-marching-band-style-disco drumming, while still retaining the quirky nature of the demo.
Which of the songs on the record is most different from your original concept for the song?
Nicky: When I heard the demo for “I Can’t Believe What I Got Myself Into This Time” it was a slow ballad, pretty simple. Vince on keys, a few lyrics, bits of guitar, and maybe a maraca. But really, really strong. At the time we were looking to add new songs to our set and we weren’t playing keys live, so we had to figure out how to adapt it. After several iterations it became a rocker with The Cars or The Strokes kinda vibe. That’s how we recorded it.
Did you have any guest musicians play or sing on the record?
Vince: Wade Ryff, who plays in the Los Angeles based band “Races,” played bass for the bulk of the recording. Nicky’s former Gore Gore Girls bandmate, Jenny Pirch, played bass and sang backing vocals on “(She’s Got) A Heart Of Stone”. Rick Parker added some special sauce on keys/organ on a few tracks as well.
Who engineered, mixed, mastered and/or produced the record? What input did those people have that changed the face of the record?
Nicky: Rick Parker. Rick Parker. Rick Parker. The recording process was pretty stripped down, not too many people involved. Rick worked with us from start to finish on recording, mixing, and mastering. It was like he was a band member. I would say he definitely he had a major role in how everything turned out sonically. We had a lot of ideas that he either fine tuned, plussed out, or maybe even talked us out of. All for the better
Is there an overarching concept behind your new album that ties the record together?
Vince: Growing up I had a hard time with the ladies, so I really latched on to the themes in music of the ‘50s and ‘60s. All of the songs on our new album deal with heartache and heartbreak. The title track, “Look How Fast A Heart Can Break,” sums up the prevailing mood and stories told over the course of the album. The babes are diggin’ me now though, so the next album could go in a different direction…who knows?!
Have you begun playing these songs live and which songs have elicited the strongest reaction from your fans?
Nicky: We play almost everything from the album in our current live show. It seems like the songs that are getting the most attention right now are “(She’s Got) A Heart Of Stone”, “We Don’t Talk Anymore” and probably “Our Last Goodbye”. We sing our asses off on that last one.
(Listen to The Singles’ ”Inamorata” via SoundCloud.
Connect to The Singles via Facebook and Twitter.)