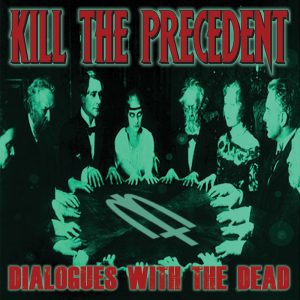 Dialogues With The Dead

If people aren’t paying attention, you can’t just tap them on the shoulder and whisper in their ears. You’ve got to shake them and scream—as loudly as humanly possible. That’s what Sacramento septet Kill The Precedent do on their debut full-length for Minus HEAD Records, Dialogues with the Dead.
An industrial grind rages through a metallic death march fueled by hardcore energy and a sinisterly danceable groove. You’ll be paying attention to these seven men—Twig the Exfoliator, Tapeworm, Killsbury, Sgt. Pepper, Jay ELLo, Jon the Jew, and The Ugly American—as soon as you hear them.
Ghettoblaster recently caught up with Twig to discuss the revolution they’ve started with Dialogues with the Dead.  This is what he said about the record, and strangely, about covering Jessica Lea Mayfield!?!
When did you begin writing the material for your most recent album?

Gosh. Maybe 8 years ago? We self-released half of this album as an E.P. about two years earlier. We’ve since remixed many of those, and tracked five or six more to add to this full length.
What was the most difficult song to take from the initial writing stage through recording and mixing? Why was it so troublesome?

I personally believe it was “Free Reign”. That was the first song I ever wrote in this band. Got stuck on it forever. It took adding three more members to finally finish it. Even in the studio three years ago, and three months ago, we’ve made some slight changes. Actually, I’m still writing it! This is just the second draft.

Which of the songs on the record is most different from your original concept for the song?
Since most songs are conceived with only one part or verse, They pretty much have all changed very drastically. There has never been any set concepts. We tried that once. It just doesn’t work. Plus, we thrive on hurting each others’ feelings!
Did you have any guest musicians play or sing on the record?

Just Jaycen Mckissick on the bonus track. I love Jessica Lea Mayfield, and I love that song. I explained to him how I wanted to cover it. We had to work in Oakland for a couple months, so we ended up tracking most of it at our hotel every night. I’m sure the guests were pleased.
Who produced the record? What input did that person have that changed the face of the record?
I produced the record with the help of Matt McCord on a couple songs. The band had some say of course. My band hates me! One guy quit.
Is there an overarching concept behind your new album that ties the record together?

Ummm, not really. But if there was one, it would be that you should always believe everything you hear, and you can always count on god to make things better. It’s never worked for us. But, people seem to believe that, so we like to write about it.
Have you begun playing these songs live and which songs have elicited the strongest reaction from your fans?

All songs have been played live. Fans seem to love the fast ones. I believe the videos we attach to each song during our live show also makes each fan’s opinion vary.