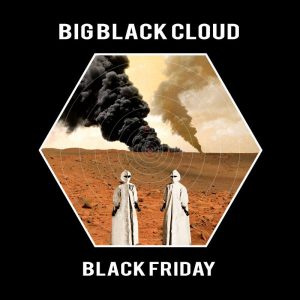 Since fleeing the swampy south for the dank Pacific Northwest almost a decade ago, the furious avant punks Big Black Coud have been honing their peerless amalgam of garage, noise rock, psych and genuine weirdness into an ever-sharper set of sticky shivs to get under your skin and turn your brains all inside out. Black Friday is a slithery sci-fi nightmare, all twists and turns and bunsen burns, fuzzed-out unhinged fun.
Comprised of guitarist/vocalist Nick Capello, bassist/vocalist Soo Koelbli, and drummer Travis Wainwright. Big Black Cloud has released two 7-inches, a 10-inch, a 12-inch LP (Dark Age), and the Sh*tty Vibrations cassette prior to Black Friday, their first release for Portland outsider label Eolian Empire. Big Black Cloud sounds a bit like Circus Lupus and Pere Ubu, or maybe a Royal Trux more speed-freaked than junked-out, sprinkled with some Brainiac-ish moments and a big ol’ dose of Cows-like abandon, but it seems they’ve never heard-or even heard of-those bands. Go figure.
Ghettoblaster caught up with drummer Travis Wainwright on the eve of their tour with Eolian Empire labelmates Drunk Dad to discuss Black Friday.  This is what he said about the album that hit streets July 2…
When did you begin writing the material for your most recent album?
In early 2010, shortly after getting back from our final tour as a 5-piece band.
What was the most difficult song to take from the initial writing stage through recording and mixing?  Why was it so troublesome?

That is a tough question, because we had to record and mix the record twice!  The first mixed draft got lost on a crashed hard drive, and 1 of our 2 tape reels had already been recorded over, so we had to start almost from scratch.  There were actually several songs that we recorded during both sessions that didn’t make it onto the record, and some of them we ditched because they weren’t translating into a recording the way we wanted them to.  The songs that made it onto the record all worked fairly easily.
Which of the songs on the record is most different from your original concept for the song?

“Pile Of Shit” came from us listening to “Guillotine” by Death Grips right before practice, and just became what it was out of nowhere.  A lot of our songs happen that way.
Did you have any guest musicians play or sing on the record?
Joel Hatmaker plays drunken trumpet on “Barbaric, Mystical, Bored.”
Who produced the record?  What input did that person have that changed the face of the record?

Alex Yusimov from The Pool Recording Studio here in north PDX recorded this record, as well as our last LP.  His input through the recording and mixing process has always rounded our songs out and often takes them up a notch.
Is there an overarching concept behind your new album that ties the record together?
This record was a learning process for us in a lot of ways.  We had just pared down into a 3-piece when we started on this group of songs and were trying to figure out what we were capable of and what we were good at, so we just tried everything and recorded a lot of songs.  Then we chose the most appropriate material out of that pool and put together what we thought was a solid and calculated collection of work that translated what we were trying to get across.  The songs on this record are generally about feeling anxious and alienated and paranoid about the future.
Have you begun playing these songs live and which songs have elicited the strongest reaction from your fans?

We’ve been playing all these songs for a couple of years now.  They usually comprise about half of our current set, the rest being new material we have yet to record. “Wastoids,” “Human Host” and “Medusa” have been pretty steady crowd pleasers.
(Catch Big Black Cloud at one of these July dates: