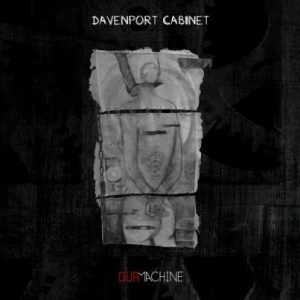 In January, Davenport Cabinet, the alternative folk rock solo project of Coheed and Cambria guitarist Travis Stever, released its second studio album, Our Machine, via Everything Evil.  Originally called The English Panther, Stever released his eponymous debut in 2006 in between tours and recording with his main band Coheed and Cambria.  Shortly thereafter, he renamed the project after The Davenport Brothers, a pair of 19th-century magicians whose famous illusion involved a large cabinet filled with instruments, which seemed to play themselves.
In October 2008, the freshly coined Davenport Cabinet released the album Nostalgia in Stereo, a mixture of new and old material inspired by Stever’s realization that the most poignant moments of his life were always tied to some kind of album, soundtrack or song.  Three years after the band’s first studio album, Stever’s cousin Tyler Klose joined the project in 2011, sharing guitar, vocal and writing duties which eventually led to the creation of the band’s follow-up full-length, Our Machine.
Ghettoblaster caught up with Steever as Coheed and Cambria geared up for their U.S. tour with Between The Buried And Me and Russian Circles to discuss the album.  This is what he had to say about it…
When did you begin writing the material for your most recent album?
A couple of the songs are 3 or 4 years old. Some of them were written and recorded as recent as September.

The song “Fortress” and I still am not happy with it. I just loved the beginning and verse parts too much to let it go. But it is definitely the one that I wish I didn’t have on the record. That’s how it goes.

Which of the songs on the record is most different from your original concept for the song?
Black Dirt Burden started as the banjo riff at beginning. I built the song around that.
Did you have any guest musicians play or sing on the record?
My cousin Laura Tsagarris sang on simple worlds she is a great singer song writer herself. I also had friend Tom Farkas play bass on “Black Dirt Burden” and Jimmy Schultz plays guitar lead in middle of “Deterioration Road.”
Who produced the record?  What input did that person have that changed the face of the record?

It was a self produced record. I do however credit Mike Major who mixed and mastered Our Machine with producing too. He put a lot of time and energy into making the record sound good.
Is there an overarching concept behind your new album that ties the record together?

It’s more of just a look into the past few years of our lives.
Have you begun playing these songs live and which songs have elicited the strongest reaction from your fans?
We have done some rehearsing as a full band. Came together real well. Busy as hell with Coheed obviously, but on time off will be rehearsing and hopefully playing out soon. Some songs that seem to be liked by fans are “Simple Worlds,” “Black Dirt Burden,” “These Bodies,” and “Drown It All.”