In 1996, everything happened at once, Travis John (of Small Brown Bike) borrowed his brother’s guitar, got a four track for a gift and then started writing and recording songs. At first, some of his recordings would make friend’s mix tapes and as time passed Travis continued to demo songs and share them on social media sites. 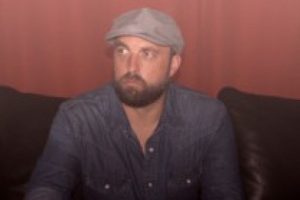 During the Summer of 2012, Travis recorded Goodbye Summer, Hello Fall at his in-house studio, The Study. This three-song EP was digitally released on November 13, 2012 by John’s own Old Point Light. Sixteen years of gathering material, writing and waiting patiently to release his first full length, he released a split B-Sides record, The 12 Laborers, with his side band Leave Let Be on January 15 of this year. Weeding out the demos, Travis went back into The Study in February of 2013 to start recording his first full length August Woods, but while he was going through tracks he came across a record he began recording in 2009 from his side project, Leave Let Be, but had never finished. This batch of songs, dubbed We Travel Light will be released simultaneously with August Woods this fall.
Ghettoblaster recently talked to John about both records.  This is what he told us about them.
When did you begin writing the material for your forthcoming albums?
For We Travel Light, the majority of the songs were written between the years 2007 and 2009 and a few were written in 2011. We Travel Light is the start of albums and songs that I’ve recorded and never put out. August Woods was started in late 2011 and I’m still finishing up that record.

What was the most difficult song to take from the initial writing stage through recording and mixing?  Why was it so troublesome?
I would say all of We Travel Light.  I’ve recorded each song 10 times, 10 different ways and completely stripped or layered with twenty different instruments. I feel like I’ve finally found my happy medium with what I’ve got now.

Which of the songs on these records are most different from your original concept for the songs?
Every song on August Woods is different from its original idea. Most of the guitars or piano tracks were recorded on my phone as ideas… When I went into to start writing the parts or songs I just decided to dump the original idea into the tracks and started cutting them up and building beats and noise around them.

Did you have any guest musicians play or sing on the records?
I did, Dan Jaquint plays drums, piano and some saxaphone on We Travel Light.
Who produced the records?  What input did that person have that changed the face of the records?
On We Travel Light, Dan Jaquint (of Small Brown Bike and The Fencemen) recorded a few of the jam’s foundations, and then this year I finished the recordings and the remaining parts for the songs. I imagine there was something he said to me back in 2009… I think when he said that my demos sound better than the studio versions. That gave me the confidence to start recording at home and call these recordings the record. And I decided not to over think these records… just let them be. I get myself into trouble when I’m left with a song for too long… I just layer and layer the crap out of it.
Is there an overarching concept behind either album that ties the record together?  What is the relationship between the two records if there is one?
We Travel Light has no real concept – it’s allowing me to move freely, letting heavy things go, closing the door on a chapter – I allowed things to get too heavy or too important – I’m lessening the load by putting that record out. August Woods on the other hand is about living more externally instead of internally… getting outside of yourself.
Have you begun playing these songs live and which songs have elicited the strongest reaction from your fans?
The few shows I’ve played, it feels like people are wondering what I’m doing – maybe more confusion… I haven’t played any of the songs from August Woods. I’m very excited to see what those songs do live. I’m still putting that one together.
(Stream “Hello Fall” and “Chip Away” from Travis John here!)