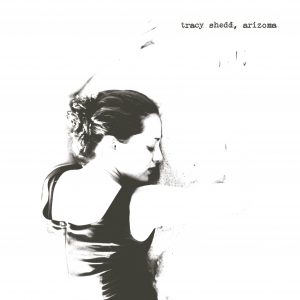 Twenty years after taking her first steps recording vocals for Sella, a high school band from Jacksonville, FL, and twelve years succeeding the launch of a solo career with Teen-Beat Records, Tracy Shedd has delivered the most honest, forthright, and insightful album of her career.  Arizona, Shedd’s debut with New Granada Records and fifth full-length recording, presents the slowcore songstress with guitarist, James Tritten, as an acoustic duet.  As Shedd reports in the opening lines, Arizona is a walk “down memory lane” and “may take you by surprise,” but leaves you with a yearning to be “near the ones (you) love.”  Tracy Shedd’s competence displays a wisdom far beyond her years, and is evidence to her growing popularity as an American songwriter.
Arizona is a true album, documenting Tracy Shedd’s own experiences of life in Tucson, AZ. Like your family’s own photo album that gives proof you were once carefree in your Underoos, and brings back that first love through prom photos, Arizona recalls a time of growth for Shedd in The Old Pueblo, with many life-lessons.  Arizona is Shedd’s gift to us: her consciousness, her principles, her judgment, and her understanding of life.
Ghettoblaster recently caught up with Shedd to discuss the record and this is what she said about it.
When did you begin writing the material for your most recent album?
The winter of 2011 my husband and I went on a month U.S. tour with a drum machine/iPhone app, 2 electric guitars and a Roland Piano. We got such a great response with the music being simplified and decided to take it even further.  After the tour at the beginning of 2012 I started to concentrate on writing solely on my acoustic guitar. We have always wanted to tour Europe and this made sense two acoustics, two plane tickets, done. Now we need to get that European tour booked
What was the most difficult song to take from the initial writing stage through recording and mixing?  Why was it so troublesome?
The actual writing and recording was easy for me. The entire album was recorded in less than a week. I guess the hardest part would probably be after recording the album and sitting down to listen to it. I felt a little naked albeit I am proud of it and wouldn’t change a thing
Which of the songs on the record is most different from your original concept for the song?
“All the little things” started out with me ooohing between the verse and the chorus and I had an idea, literally a week before we went in the studio for my friend, Naïm Amor to sing sort of a call and response in French. I’m so happy with the way it turned out.
Did you have any guest musicians play or sing on the record?
Yes, I am so lucky to have such talented friends who were willing to sing some backup with me. As mentioned above Naïm Amor sang on all the little things. Denison Witmer on “Boats”, Howe Gelb on “Teenage Riot” (Sonic Youth cover) and Ivan Howard (The Rosebuds) on “Broken Arrows” and “Sweet Talking”.
Who produced the record?  What input did that person have that changed the face of the record?
I produced the album. Craig Schumacher and Chris Schultz from Wavelab studios definitely helped me keep my eye on the ball by not adding too many tracks  and helping me accomplish my vision
Is there an overarching concept behind your new album that ties the record together?
It’s a collection of songs that I wrote that documents some of my time living in Tucson Arizona and it’s from the heart
Have you begun playing these songs live and which songs have elicited the strongest reaction from your fans?
We have played a few shows with the new material and have a small southeast tour coming up next month.  As far as strongest reaction from fans: As soon as I sing the lyrics from “Boats”– “I’m there for you, but I probably need you more than you need me“ — I usually get a few tears from the crowd and me.  Haha.  I guess it’s a good thing that my songs make people feel something.
(Catch Shedd live at one of these forthcoming dates:
November 20, 2013
Atlanta, GA – Drunken Unicorn
November 21, 2013
Tampa, FL – New World Brewery
November 23, 2013
Jacksonville, FL – Rain Dogs
November 25, 2013
Amelia Island, FL – The Green Turtle)