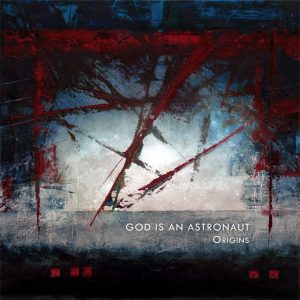 God Is An Astronaut’s upcoming seventh studio album, Origins is a post-rock masterpiece that’s driven by somber piano and atmospheric guitars that swell into a surging wave of beautiful intensity.  Origins is comprised of twelve dynamic tracks that evoke an array of emotions through the soaring soundscapes that their fans have come to love over the last decade.
Founded in 2002 in Glen of the Downs, Co. Wicklow, Ireland by twins Niels and Torsten Kinsella, the band has since expanded to include Lloyd Hanney (drums), Jamie Dean (piano/synths) and Gazz Carr (guitar).
Ghettoblaster caught up with Torsten Kinsella to discuss Origins, which is scheduled for North American release on September 17 via Rocket Girl Records.  This is what he said about it.
When did you begin writing the material for your most recent album?

We began writing this album back in 2010, from the initial batch of ideas “The Last March” and “Weightless” made it onto the record.
What was the most difficult song to take from the initial writing stage through recording and mixing?  Why was it so troublesome?

“Spiral Code” was probably the most difficult one. Originally we had live drums on there and it just didn’t groove right, so I programmed it on a Drum machine, it took a long time to find the pattern and the correct sounds. Once we had the drums in place I realised the tempo was too slow. Once the tempo was finalised the arrangement underwent structural changes. Mixing it was different than the others, we really had to mix it drum heavy which took some time to figure out.
Which of the songs on the record is most different from your original concept for the song?

I think “Transmissions” began as something else, a more downbeat track but it changed throughout the course of the process. It originally had a different chorus, but it killed the energy of the verses, so a new more driven chorus was written.
Did you have any guest musician’s play or sing on the record?

Yes Pat O’Donnell performed guitar, keys and vocals. Kevin Foran played trumpet and
Donal McGuinness played the trombone. Thomas Kinsella played bass on “The Last March” and Gazz Carr performed vocals on “Reverse World”.
Who produced the record?  What input did that person have that changed the face of the record?

I produced and recorded the album with Pat O’Donnell, he helped me write and record the album so definitely the face of the record would have been different without his involvement.
Is there an overarching concept behind your new album that ties the record together?
I believe our music describes our lives emotionally over the past three years, there is light and shade. It began with the “Last March” which felt like a funeral song and ended with “Light Years from Home” which feels like reaching the perfect place. All the tracks in between describe the phases we’ve experienced throughout the last three years. Saying that, we just let the record evolve in a very natural way.
Have you begun playing these songs live and which songs have elicited the strongest reaction from your fans?

We have played a few of the tracks live so far. They all went down very well with “Red Moon Lagoon”, “Calistoga” and “Transmissions” getting the biggest reaction thus far.
The vocal approach on some of the new tracks has added a new dimension to the live set.
We are looking forward to seeing you all soon.
(Pre-order the CD now at http://rocketgirl.co.uk/label/release/rgirl98 and the LP at http://rocketgirl.co.uk/label/release/rgirl98LP.  Follow GIAA now at https://www.facebook.com/godiaa.  Watch the new video for “Reverse World” now at http://youtu.be/i_gl-WNxS4Q)