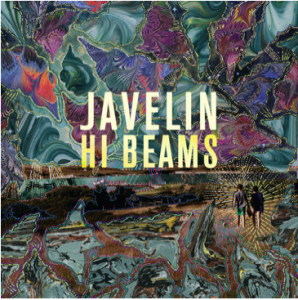 NY/LA genre-hopping duo Javelin have announced the release of their second full-length Hi Beams, out March 5 with Luaka Bop. Javelin (cousins George Langford and Tom Van Buskirk) recorded and mixed Hi Beams at Machine With Magnets (Pawtucket, RI) using proper microphones, a vintage mixing desk, an array of amplifiers, real plate reverb – in the traditional sense a “studio album.” Previous work had been cobbled together in home studios and mixed on computer. On this record, Javelin aimed for a sound they could not have achieved by themselves.
Javelin has played shows and toured with Yeasayer, Sleigh Bells, Future Islands, Matt & Kim, Warpaint, Major Lazer, performed at Lollapalooza and The Whitney Museum, as well as parties across the U.S., Europe, and South America. In this time the duo has become an in-demand production and remixing team, working with everyone from Neon Indian and Lucky Dragons, to G-Side and Tom Ze.  Hi Beams represents a more holistic approach to writing and recording than previously attempted by the band. The lyrics and vocal harmonies for the first time are foregrounded in decidedly songlike forms; these songs were made to be performed in concert.
Ghettoblaster recently caught up with George and Tom to discuss the record via e-mail before they embark on a series of dates to support it (dates below).  This is what they (collectively) had to say about it…
When did you begin writing the material for your most recent album?

The album represents disparate bursts of creativity mostly from 2011 and 2012.  A few tracks came about a week before we went into the studio.
What was the most difficult song to take from the initial writing stage through recording and mixing?  Why was it so troublesome?

Sonically, the trickiest track to finish was probably “Friending.”  The main element is a sample from a record that turned out to be warped, so the pitch and corresponding harmonies were tough to wrangle into shape.  There are competing rhythmic ideas in it as well.  It was a mess for a while, but I think we got ahold of it.  If it was a visual object, it would be a big pile of colorful melted wax.
Which of the songs on the record is most different from your original concept for the song?

“Nnormal” came from a remix George made for Janka and the Bubu Gang that had a really relaxed and beachy vibe, like a hot sundeck or something.  After we re-worked it the track became one of the most off-kilter, mutant songs we’ve ever made.  Total 180.?
Did you have any guest musicians play or sing on the record?

Moss Of Aura (keyboardist in Future Islands) wrote the main elements of “Light Out.”  We basically sampled his track “Hey” from the album “Still Parade.”  Travis Murphy (formerly of the now extinct Killer Whales) wrote the main melody and played guitar on “Drummachines.”
Who produced the record?  What input did that person have that changed the face of the record?
Seth Manchester at Machines With Magnets had a huge impact on the sound of the record.  We only used one effect plug-in on the whole thing!  He re-amped everything and used outboard gear to do everything.  He also contributed a of technical Pro Tools prowess to the sequencing of the drum parts.
Is there an overarching concept behind your new album that ties the record together?

Sky?  Age?  Ocean?
Have you begun playing these songs live and which songs have elicited the strongest reaction from your fans?