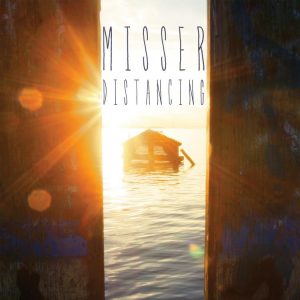 When you hear the term “side project” you immediately think of half-assed songs, by members of bands you might love, but are better off sticking with the main project. But every now and then there’s an exception to that rule. Misser is one of those exceptions. Featuring Tim Landers of Transit and Brad Wiseman of This Time Next Year, Misser is a pop-punk/rock band who is out to prove that side projects are more than just left over songs and reworked demos.
The follow-up to 2012’s acclaimed debut LP, Misser’s EP, Distancing, was released earlier this week. The track “Burn Out” can be streamed here: http://youtu.be/3M60Ar3EC6c. Ghettoblaster caught up with Tim Landers to discuss the EP and this is what he had to say about it…
When did you begin writing the material for your most recent release?
All of the songs for the Distancing EP were written pretty close to the actual recording of it. “Goddamn, Salad Days” was a song we wrote once upon a drunken night on our first tour, with a great friend on drums involved. The rest were acoustic demos conceived sometime during the year of 2012 and the first week of 2013, that were brought to full band life in the two days before the recording sessions started.

What was the most difficult song to take from the initial writing stage through recording and mixing?  Why was it so troublesome?
“Slow It Down//Write It Out” was the song that changed the most. Not that it was difficult, it just took some re-arranging to get it to the right place. I wouldn’t have it any other way. The songs that take time are the ones that count.
Did you have any guest musicians play or sing on the record?
Mike Ambrose, formerly of Set Your Goals played the skins and Torre Cioffi of Transit played some axe…but we might actually be a band now. I don’t really know, though.

Who produced the record?  What input did that person have that changed the face of the record?
Sam Pura was the man in charge while our good friend John Delloiacono was engineering. We all had full control though — it was cool. We had fun.

Is there an overarching concept behind your new album that ties the record together?
Negative.

Have you begun playing these songs live and which songs have elicited the strongest reaction from your fans?
Just one, “Goddamn, Salad Days.” It has been fun as hell!