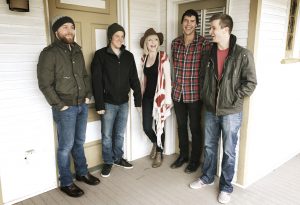 Worn Out Skin is the newest album from Annabelle’s Curse, a transcendent, genre-busting five-piece band that deftly sways from haunting and ethereal melody to unflinching and unforgettable rhythm and riffs. Musically and lyrically, Annabelle’s Curse draws from unyielding roots in Bristol, Virginia. The lyrics — sometimes haunting, sometimes hopeful — are consistently eloquent and evocative, rare and irresistible.
Annabelle’s Curse offers a sumptuous blend of folk, bluegrass, even rock. It’s the music, its originality and the addictive nature, that truly defines this rising group of unassuming yet superbly talented musicians.
Ghettoblaster recently caught up with singer, guitarist, banjoist Tim Kilbourne to discuss the record. This is what he told us.
When did you begin writing the material for Worn Out Skin?
A few songs (Premonition, Brother in Arms) on Worn Out Skin were actually written not long after Hollow Creature came out. Most of the songs on the  album were written during the summer and fall of 2014.
Which of the songs on the LP is most different from your original concept for the song?
The song that evolved the most from the original idea was “Beneath the Clouded Moon.” Originally, I wrote this song on the banjo and thought it would remain a mainly acoustic song, but in the studio we decided to expand on the song and get a little weird.  Looking back, I’m glad that we did.
It’s been two years since the release of Hollow Creature. How do you feel you’ve changed, musically speaking?
With Hollow Creature, we were not prepared enough for the studio. We didn’t feel satisfied with many songs on the album and felt like we may have rushed through recording some of them. For this new album, we went to the studio more prepared and we had a greater idea of what we wanted the finished product to be.  We spent months jamming and experimenting on the sounds of the songs until we were more satisfied with the finished product. We made it our priority to create more unique rhythms and melodies whether from instruments or vocals.
“Rich Valley” has some really beautiful lyrics. Could you ever see yourself moving away? Or will this always be home?
We love the area we live in, and no matter what happens in the future, I think this region will always be our home. I don’t really see us moving away from here any time soon because, as we travel more and more, we are realizing that Abingdon is a great launch pad that connects us within four to six hours of many big cities and music hubs. This valley will always be our home.
Do you guys have plans to tour outside of the Appalachian region?
We most certainly do! We have been working very hard to break outside of our comfort zone both musically and geographically this year. We have already been able to make our way across nine states in the region, spanning from Southern Georgia to Central Indiana. We are in the process of making much bigger plans for 2016 and hope to hope to cover a lot more ground.
(Visit the band here:
http://www.annabellescurse.com https://www.facebook.com/annabellescurse https://twitter.com/annabellescurse
Catch them live:
10.30 • 622 North w/ The Band Concord (Blacksburg, VA)
10.31 • Wolf Hills Brewing Company (Abingdon, VA)
11.06 • The Empty Glass w/ The Concord Band (Charleston, WV)
11.07 • Beaver Moon 2 Party (Chapel Hill, NC)
12.06 • The Grey Eagle w/ The Black Lillies (Asheville, NC))