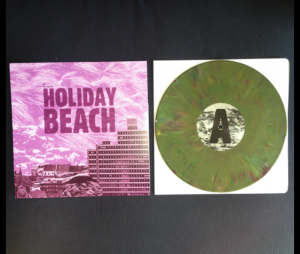 Initially founded as a folk act in high school, Seattle quartet The Hunting Club reformed in 2011 to bring their brand of garage rock with a countrified/blues tinge (replete with vintage early 60’s reverbed production) to the Northwest and beyond.  The Hunting Club has shared stages with such dissimilar and notable bands as Japandroids, Earth and Bigfoot Wallace. Armed with the ability to capture the reverberating tone of vintage rock, their video for song “Shouldn’t Be So Easy,” premiered recently by CMJ.
Ghettoblaster talked to The Hunting Club guitarist/vocalist Tim Damon about the recent release of their debut EP, Holiday Beach (via Hood Cabin Records).  This is what he told us…
When did you begin writing the material for your most recent EP?
These are the very first songs that came out of this group, and we got together about a year and a half ago, in Winter 2012.

What was the most difficult song to take from the initial writing stage through recording and mixing?  Why was it so troublesome?
“This Is (How I Know)” was a huge pain in the ass. We had to try three or four different guitars and God knows how many takes to get an ideal sound for the slide guitar parts, and the ending/outro had to be reworked and simplified from a more improvised version we used to play live that was just not coming out in the recordings, but it made for a better song in the end, so it was worth the struggle.
Which of the songs on the record is most different from your original concept for the song?
Again, “This Is (How I Know)” takes the prize. The song started out with a plinky harmonics guitar part, but in fleshing it out with the band, the slide came in along with that vacation-y/island-y sound from the bass and keys that makes you feel like you’re getting off a plane in Hawaii. We decided to embrace it, and that’s how it got recorded.
Did you have any guest musicians play or sing on the record?
Our engineer Jake Thompson added some wicked hand claps to a couple of songs, other than that we have it totally covered as a band.

Who produced the record?  What input did that person have that changed the face of the record?
Since we recorded the EP with our close friend, we co-produced the record, but our drummer John Maiello took the most commanding role in making actual decisions about what changes should be made to any given part. Overall these songs are pretty dry and not overly produced, so beyond stylistic choices like recording vocals in the bathroom or using a tiny practice amp to record some lead parts, there were not really any game-changing production choices made during recording.

Is there an overarching concept behind your new album that ties the record together?
Nothing intentional, these are just our first round of songs as a band.

Have you begun playing these songs live and which songs have elicited the strongest reaction from your fans?
We have been playing all of the songs live since before we recorded any of them, but the clear favorites are “Shouldn’t Be So Easy,” which we premiered a music video for on cmj.com, and “These are the Days.”